This is a rare example of a U.S. Model 1903 cutaway rifle that was manufactured by Remington Arms Company circa mid 1942. These cutaway type rifles were used as training aids, by armorers and company officials, to visually show the internal functions and mating surfaces of the various parts. They were usually manufactured using out of tolerance parts and/or early parts used in the set up of the various manufacturing machines. They all lacked the standard markings and inspection proofs just like this example. A small amount of these Remington 1903 cutaways were ever made, with most being destroyed at the end of production or given away as gifts after the war. This excellent example has most of its viewable cutaway sections on the left side with a few on the right. They all show the internal mating/functional areas of the rifle. Some of the cutaway areas on this rifle are the chamber, internal areas of the magazine, the sear/striker rod engagement surfaces, the receiver recoil lug/stock area and the locking lugs on the bolt. As noted, this rare example has no factory receiver markings, serial number or proofmarks except for the barrel which is marked "RA/6-42", two hand stamped "SCRAP" markings on the underside of the stock ahead of and behind the trigger housing as seen on other Remington cutaway 1903 examples indicating this is a rejected production stock, and a flaming bomb stamp on the right of the buttstock. It has the original early combination Remington dark green parkerized and blued finishes on the various parts. It is fitted with a second pattern, two bolt "S" style straight grip stock and handguard. It has all the correct milled components. Similar examples are pictured and described on pages 121-123 of the book "03 Springfield Service Rifle" by Bruce N. Canfield, and pages 238-240 of the book "The Springfield 1903 Rifles" by Lt. Col. William S. Brophy. Includes two .30-06 Frankford Arsenal "54" dated dummy rounds and cleaning kit in butt compartment.

Excellent as a factory made cutaway rifle, retains 97% plus of the original combination green, parkerized, and blue finishes overall with arsenal refurbished blue finish visible on the middle barrel band. The various cutouts are all original and clearly expose the inner workings of this historic rifle. Stock is very fine with attractive rich oil finish, some scattered light handling marks, one small crack behind the bottom of the rear magazine cutout, a minor chipped sliver at the bottom edge of the recoil lug cutout, and defined edges. Mechanically excellent. A desirable example of a limited production World War II Remington Arms factory cutaway U.S. Model 1903 rifle. 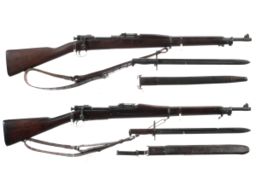 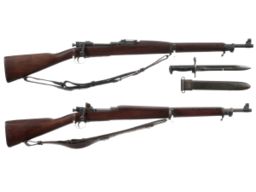 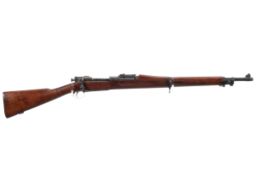 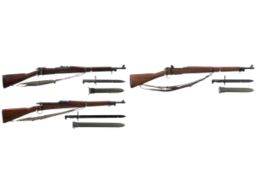 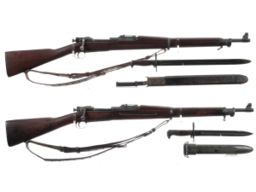 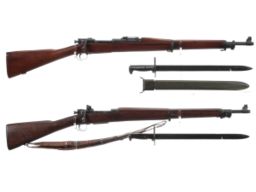