A direct copy of the Beretta 92 or M9, the PT92 was produced in Brazil by Taurus on leftover Beretta machinery after their contract with the Brazilian military had expired. Multiple branches of the Brazilian military quickly adopted the "homemade Beretta" as their service sidearms, including the Brazilian Air Force. This specific example bears the standard Taurus markings along with the Brazilian crest and "MINISTERIO DA AERONAUTICA" on the right of the slide. Included with this specific pistol are two documents from the Brazilian Air Force, the first being a 1985 dated note of friendship from Chief of Staff Alfredo Henrique de Berenguer Cesar to General Charles A. Gabriel of the U.S. Air Force presenting the pistol to him as a gift. The other lists the pistol by serial number and appears to be a letter to the U.S. Air Force stating that the pistol was in fact given to Gabriel as a gift by the Brazilian Air Force. General Charles A. Gabriel held various commands during his air force career including commander of the 432nd Tactical Reconnaissance Wing in Vietnam, during which he is credited with shooting down two MiG-15s, commander of United States Air Forces in Europe, and Chief of Staff of the United States Air Force before retiring in 1986. Includes a hardwood case (interior not fitted), bore brush, and an extra magazine.

Excellent, retains 99% plus of the original blue finish with only the slightest handling marks. The grips are also excellent with a few scattered light handling marks and crisp checkering. Mechanically excellent. The case is fine with some minor handling/storage marks scattered throughout. 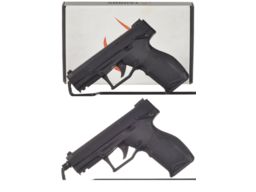 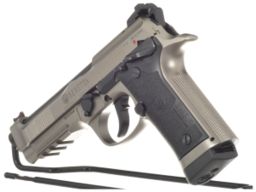 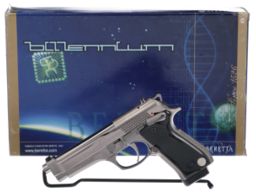 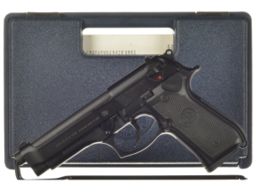 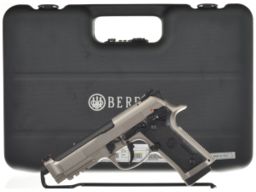 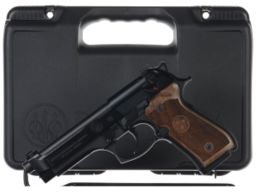