These were the standard commercial Winchester Model 1200 shotguns produced during the late 1960s and early-mid 1970s that were purchased and adapted for the military with a bayonet lug/heat shield and U.S. marked. By the time most of these were delivered to the U.S. Military, the Vietnam War was nearing its end and very few are believed to have made it overseas to Southeast Asia. Some of these remained in service and saw use in Grenada, Panama, the Persian Gulf, Somalia, Iraq and Afghanistan. Most were destroyed after their service, lending to their scarcity today, with sparse government records of contract deliveries. The barrel is equipped with a six hole pattern heat shield with the bayonet lug adapter, marked with part number "11686389", on the front end that is secured to the barrel with three screws. The bayonet lug on this shotgun is sized for the M1917 bayonet, which remained in service through the time this gun would have been in use. The barrel is marked as cylinder choke and with 2 3/4 inch chamber, with "U.S." above the standard markings, and the frame is "US" marked on the left. Blue/black anodized alloy frame and trigger housing, blued magazine tube and loading gate, parkerized steel barrel, heat shield and bayonet adapter, and jeweled bolt. Fitted with an extended forearm and pistol grip stock with a Winchester branded hard rubber buttplate. 14 inch length of pull. Includes a tan canvas sling. Winchester Model 1200 trench and riot shotguns as well as similar examples are pictured on pages 177-180 of "Complete Guide to United States Military Combat Shotguns" by Bruce Canfield. 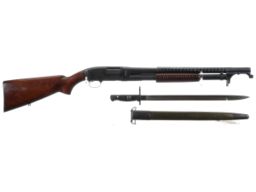 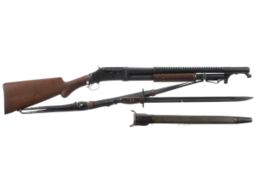 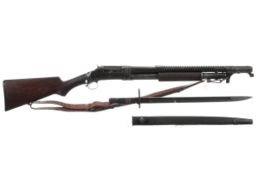 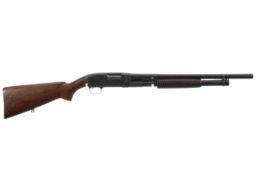 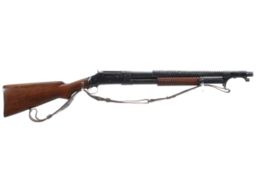 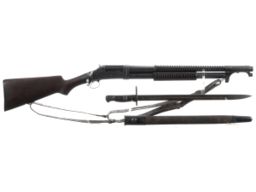