Manufactured in the 1890s by the firm of Ludwig Loewe (later DWM), the Model 1893 was the work of Hugo Borchardt and was among the first viable semi-automatic pistol designs to hit the commercial market. The Borchardt Pistol was also an important forerunner to the work of Georg Luger, who would refine the core mechanical principles of the Borchardt to make his own eponymous and world famous handgun. Fixed blade and notch sights, with "WAFFENFABRIK/LOEWE/BERLIN." on top of the chamber, "SYSTEM BORCHARDT. PATENT." on the right side of the frame, and the patent marking "D.R.P./No. 75837" on the front toggle link. A series of "crown/letter" (B, U, and G) proofs are present on the barrel, extension, and toggle assembly, with the "172,28" bore diameter on the left side of the barrel and matching external serial numbers. Fine niter blue and straw colors are present on the small parts, with smooth borders on the finely checkered hardwood grip panels and a set of three nickel finished wood base magazines; the right grip panel and all four included magazines are numbered to match, with the left grip panel blank. Included in the grouping is a matching numbered hardwood shoulder stock properly marked "GESETZLICH GESCHUTZT" on the lower edge with attached leather holster, two straight double blade screwdrivers, and a brass oiler/cleaning rod with hardwood storage case/hold-open devices. The full set fits into an included leather upholstered luggage case. The lid of the case bears a silver plaque inscribed "Premo/del General/Pablo Riccheri". The son of Italian immigrants in Santa Fe, Pablo Riccheri graduated from the National War College in 1879 and went on to the Royal Military Academy of Belgium for further education. He would spend many years in Europe, acting as a military attache in Berlin as well as an armaments officer. Later, he would serve as Director General of the National War Arsenal, Army Chief of Staff, and War Minister. After a brief retirement in 1904, he came back as Army Chief of Staff in 1910, and was later commissioned to survey the situation in Europe at the start of World War I before retiring again at the rank of Lieutenant General in 1922. In civilian life, he was one of the co-founders of the Argentine Boy Scouts Association and would receive a post-retirement promotion to full General before passing on in 1936. The exact circumstances of the inscription are unrecorded, though it is known that it was a very common tactic for arms makers to make presentations of their arms to decision makers in the military and government, both to give the VIP the chance to "test drive" the new kit as well as establish relationships that could result in a big purchase. Much of Riccheri's career was spent assessing and applying potential upgrades to the Argentine Army, which would make him a prime recipient for such a gift.

Extremely fine, with 85% plus of the original blue finish, showing some bright edge wear, mild spotting and light handling marks. Much of the surface shows a coating of varnish or similar protective overcoating. Strong niter blue and straw colors are present on the small parts. The grips are very fine, with some light dings and crisp checkering. The holster and straps show cracking, tearing and stitching loss appropriate to age, with 60% of the blue finish on the stock hardware and mild dings on the wood. The other accessories are in fine order, and the case shows mild wear and tear. Mechanically fine. 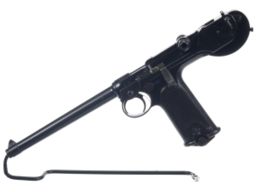 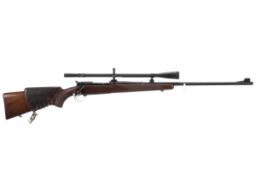 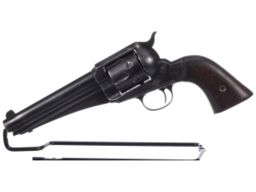 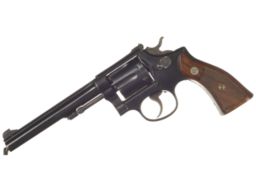 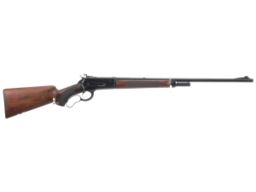 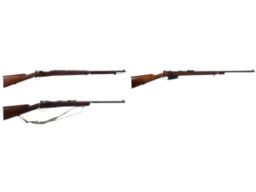