This is a rare example of a Stamm-Saurer experimental prototype military rifle as manufactured by Adolf Saurer AG of Arbon, Switzerland. Originally designed by Hans Stamm of St. Gallen, Switzerland, who designed various rifles between 1908 to 1920 as head of his own weapons development department at Adolph Saurer AG. His rifles were demonstrated to the Swiss Army, with this design reportedly shown prior to the adoption of the Bern Model 1911 straight pull rifle, as well as to various European countries with no success in obtaining orders. This rifle follows a 1910 dated Swiss patent, and U.S. patent number 1,124,071 filed November 13th, 1913 and granted January 5th, 1915. This rifle, chambered for the Swiss 7.5×55mm GP11 cartridge, features a drift adjustable blade front sight with protective ears, tangent rear sight graduated 3-20, bayonet lug, straight pull bolt with two locking lugs, internal six-round staggered box magazine and side mounted sling provisions. Matching serial number "5" marked on the left of the barrel and receiver at the breech, left of the front sight base, on top of the front sight, right of the bayonet lug, underneath the rear sight, on the rear sight slider, bolt body, cocking knob, and hidden on the follower and floorplate and on various small components. Very few surviving examples of these rifles are known to exist, with serial number 6 sold by Kessler Auktionen overseas in 2019, and serial number 11 residing in the SIG factory museum.

Very fine, retains 90% arsenal quality refinished bright blue finish with a few very light specks of pitting visible underneath the finish in a few areas, and a bright bolt with sharp markings and edges in the metal. Stock is also very fine as re-oiled with some light handling marks, a repaired chipped section behind the receiver tang, a duffle cut under the rear barrel band, and defined edges. Mechanically excellent. A rare example of a Swiss Stamm-Saurer experimental straight pull rifle that would make an excellent addition to any advanced military firearms collection! 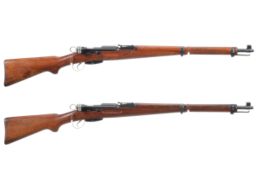 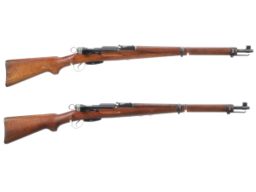 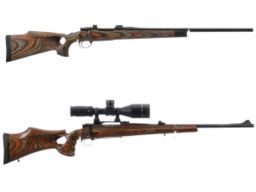 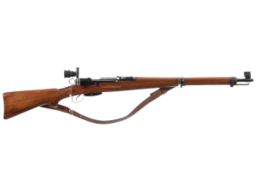 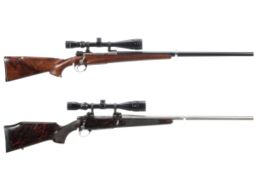 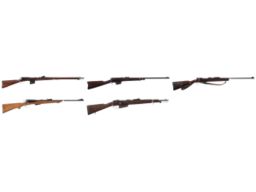