This attractive French fowling piece is signed "PIRAVBE AVX/GALLERIES A PARIS" on the lock and "PIRAVBE AVX GALLERIES A PARIS 1699" on the raised sighting flats on the barrel. Bertrand Piraube is recorded as the gunmaker to "The Sun King," King Louis XIV, and as having been granted prestigious lodgings in the Louvre Palace from 1670 when additional artists were granted space in the former royal palace after the court moved to Versailles and remained there until 1725. He was an innovative gunmaker; the flatter profile of the lock and other details on this gun dated 1699 were not employed by most other gunmakers until later. He also made guns for royalty outside of France, including a flintlock pistol made for King Charles XI of Sweden in 1676 in the MET (Accession Number: 1990.114.2) that is notes as the earliest dated firearm by him. The tapered smoothbore barrel has a large rounded blade front sight, long sighting flats, with decorative engraved finials, some nice molding along the sides at the breech section along with border engraving and girdles at the breech end, and engraved tang with mostly a border design. The flat lock plate has beveled edges, a bow and quiver of arrows on the tail, wavy line borders, scrollwork on the cock, some nice sculpting and light engraving on the frizzen, and niter blued pan. The furniture is all iron and includes floral finials and accents, light border engraving, and fairly restrained embellishment overall. The wrist escutcheon is a pierced design with a crown and grotesque mask. The buttplate is marked "No: 26" by the toe. The nicely figured walnut stock runs to the muzzle and has fine molding, raised relief scroll carving incorporating mask elements, and nicely shaped flats and comb with spire accents. A William Keith Neal Collection tag marked "G176" is included. Provenance: The Collection of William Keith Neal; The Collection of Joe M. Wanenmacher Jr

Very good with silver-gray patina on most of the metal, some light oxidation and pitting, crisp designs and markings, and mild overall wear. The refinished stock is also very good and has mostly distinct carving with some softening, some repairs mainly in the forend, some cracks concentrated below the lock, and mild dings and scratches. Mechanically fine. 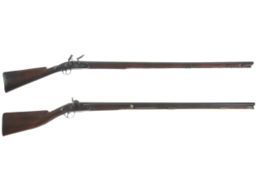 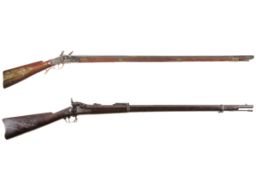 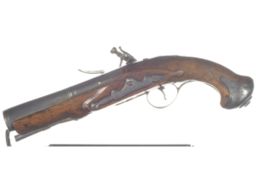 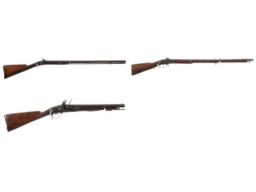 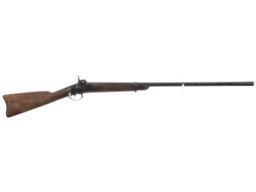 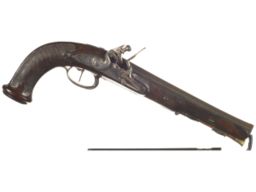