Reverend Alexander Forsyth was instrumental in the development of use of mercury fulminate as a replacement for flint and steel as an ignition source and the transition to percussion ignition. Forsyth's work was critical and innovative, but his self-priming systems were potentially dangerous since the primer reservoir could detonate. This large bore traveling or "man-stopper" pistol is his second design and is very similar to the pistol shown as item 82 in on page 43 of "English Pistols" by Howard L. Blackmore that is identified as manufactured in 1827, and uses the same system as some earlier examples shown in "Forsyth & Co.: Patent Gunmakers" by W. Keith Neal & D.H.L. Back (see illustration 36 for example). The smoothbore barrel has a flat top with a bead front sight and "FORSYTH & CO. PATENT GUN MAKERS LONDON," a swivel mounted ramrod underneath, and a casehardened patent breech with platinum bands. The standing breech has a notch rear sight and floral and scroll engraving. The lock has "FORYSTH & Co/PATENT" and scroll, floral, and border engraving including a mask design below the primer mechanism. There are no visible serial numbers, but the pistol was not disassembled. The squareback trigger guard and pommel have scroll engraving, and the wedge escutcheons and wrist escutcheon are silver. Provenance: The Collection of Joe M. Wanenmacher Jr

Very good with dark brown patina and mild pitting on the barrel and furniture, slightly lighter patina on the lock, crisp engraving, distinct lock markings, legible but faint barrel marking, and moderate overall wear. The hammer and primer mechanism are professionally made and artificially aged replacements. The stock is fine and has crisp checkering, much of the original finish, a small repair visible at the front of the lock, thin crack on the left at the breech, and mild dings and scratches. Mechanically fine. 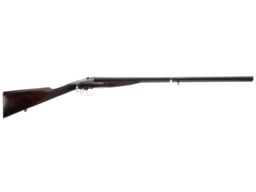 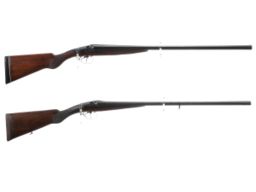 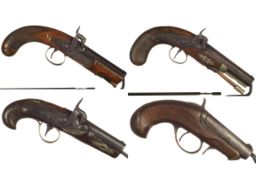 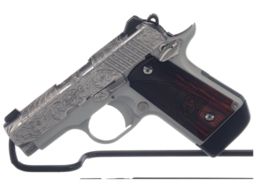 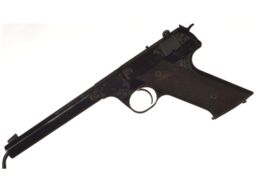 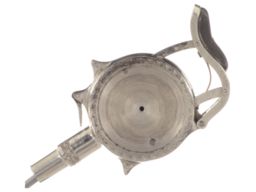