An included two-page letter typed on G.R. Taylor letterhead lists this rifle by serial number and states that the original owner was Mathias "John" Neisius (1840-1925), who was an important scout on the Oregon Trail and in the American west. On the second page of the letter, Taylor states that Neisius special ordered this deluxe Winchester Model 1886, which is listed by serial number, in 1887, and that he received the rifle in January of 1888. Taylor also states that in the early 1860s, Neisius was a scout in the U.S. cavalry at forts Randell and Mitchell. He later went on to ride in a scouting roll in the territories Dakota, Nebraska and Wyoming, even riding with Buffalo Bill Cody for a time around Fort Laramie. In 1885, he settled down to a ranching life near Silver Creek, Nebraska with his wife Magdelina, and is said to have carried and used this rifle on his ranch until he died on 29 August 1925. Also included are copies of two letters (dated 1966 and 1967) from Al Neisius, a grandson of John's. The two letters confirm most of the information previously stated by Taylor as well as one of them again listing the rifle by serial number and caliber. A copy of Mathias Neisius' death certificate is also included, listing his occupation as "Retired Farmen" as well as a copy of a notary certificate signed by Al Neisius. The included Winchester Gun Museum letter lists the rifle in .38-56 caliber, with an octagon barrel, set trigger, and checkered pistol grip stock when it shipped on 19 January 1888. Manufactured in late 1887, the top flat of the barrel is marked with the standard two-line address/King's patent marking ahead of the rear sight, and the caliber marking at the breech. The model designation is marked on the upper tang while the lower tang is marked with the two-line patent dates and the serial number. The left side of the lower tang is marked "1383 XX", and "1383" is repeated in the upper stock inlet and on the inside toe of the buttplate. The rifle is fitted with a folding, gold washed, Beach-style combination front sight, elevation adjustable buckhorn rear sight, and a Lyman peep sight mounted on the upper tang, as well as a special order set trigger. It is mounted with a finely figured, H-pattern checkered forearm and pistol grip stock with an ebony insert in the base of the grip and a crescent buttplate. This is a rifle that was clearly specifically ordered for both form AND function!

Very good plus, retains 30% of the original blue finish on the barrel, magazine, and strongest on the breech block, as well as strong traces of the vibrant case colors on the hammer. The balance has thinned to mostly a bright grey patina on the receiver and the remainder a mix of plum-brown a grey patinas with a few scattered patches of light pitting. Traces of the gold wash remain on the front sight. It is clear that this rifle was well cared for but worked hard on the western frontier. The wood is fine with a few scattered hairline age cracks, and the scattered minor dings and scratches of countless adventures in the west. Mechanically excellent. This is clearly a rifle that was purchased for both its form and functions that is filled with western character! 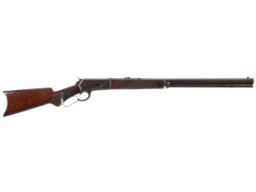 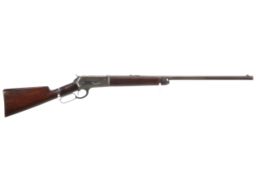 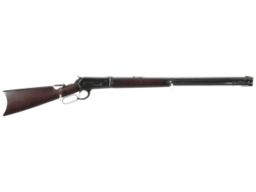 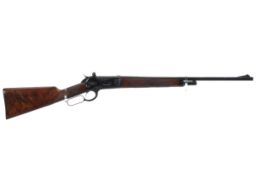 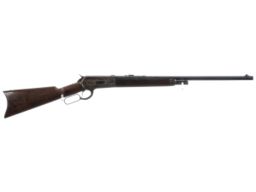 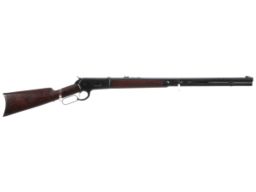