This is an example of an original unaltered "One of a Kind" Colt Factory Prototype M1911 pistol with a "Cartridge Indicating Device" installed on the left side of the slide. This pistol was originally in the Colt factory collection and was disposed of in the late 1970s. The pistol overall is just in excellent condition having been produced more for a Engineering concept gun, which clearly show very limited firing with some minor hand cycling to test the indicating device. The intent obviously was to develop an enhanced safety feature for the M1911 for Commercial sales and to be consistent with most of the other leading world handguns that were being produced at this time. To all, this may appear to be a standard M1911 Government model, however on the left side of the slide directly behind the ejection port area is a small circular flat spring device that has a small indicator pin in the center. Under the flat spring, a small hole has been drilled through the slide and projected directly in front of the face of the breech on the left side. Obviously the intent was that once a cartridge was loaded into the chamber the small pin would be pushed outward indicating that it was loaded. This specific pistol was produced in 1920 and the left side of the pistol does not have the Colt "VP" proof on the trigger guard bow, which would be correct as it was never intended to be sold, so it would not have a final inspection. The LEFT side of the slide (not the right side) has the early COLT Commercial markings in two line "COLT AUTOMATIC/CALIBRE .45" next to the Colt Rampant Horse towards the front end and the right side is completely blank. The frame is marked only on the right side with "GOVERNMENT MODEL" over the "C" prefix serial number and "G", the Colt factory inspector proofs on top of the frame. The blued barrel is correctly unmarked commercial model with the polished chamber area. It has the early components like the 1911 style checkered slide stop, the 1914 style checkered thick thumb safety, flat mainspring housing, short grip safety and the wide Colt hammer with the checkered spur. The grips are the early walnut diamond checkered patterns and it is complete with one blued half-tone Colt Commercial magazine. Accompanying the pistol is an authentication letter dated March 16,1995 from the original owner, dated 16 March 1995, and a copy of the Colt Factory inventory register identifying this pistol as inventory item 695 which was donated to the Connecticut State Library in the 1950s.

Excellent plus with 98% of the bright original Colt Factory blued finish overall with just some very minor handling marks on the top of the slide from handling and probably sitting in a display case. The grips are also in excellent plus condition showing only some very minor handling marks on the right side of the lower grip panel by the lower grip screw and a few minor chipped diamond tops on the left grip. Even discounting the fact this this is a Unique One of a Kind Prototype pistol, it is in just spectacular condition. This pistol is totally unique and writer knows of no other. 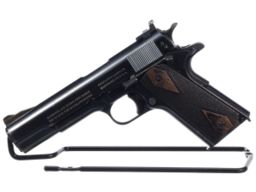 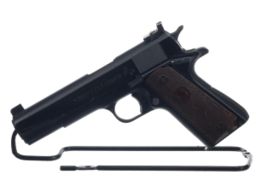 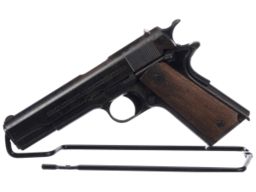 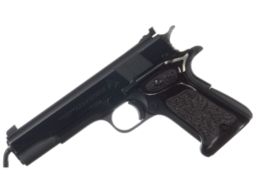 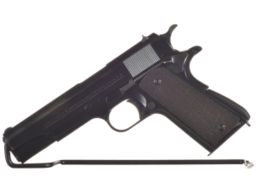 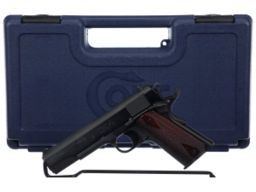