This is an outstanding, all original Presentation type M1 Carbine that was manufactured by the Underwood Elliott-Fisher Company that remains in its original unaltered, like-new condition. During the early days of WWII at the start of production, several companies that manufactured M1 Carbines for the military set aside/reserved a specific block of serial numbers usually with a letter prefix of an X, E or both, as preproduction examples or test models. Later at the end of WWII these serial number blocks were just used to present specific M1 Carbines to senior members of the military as well as Senior Executives or Corporate officials. This example is serial numbered "E 276" on the heal of the receiver denoting it was a presentation carbine. These carbines were assembled from left over military contract parts that used both early and late production parts and select stocks and handguards to make sure they not only looked good but functioned equally as well. It is estimated that approximately 50-100 carbines were manufactured by several companies, with the majority of the known examples manufactured by the Inland Division and Winchester Companies. So far we have only sold several examples in past auctions, so one will conclude that they are very rare. Any presentation example is highly sought by advance collectors today. This carbine has the standard "U.S. CARBINE/M1" markings on the front receiver ring with the rear area stamped "UNDERWOOD/E 276", and the barrel is marked "UNDERWOOD/9-42/Ordnance Shell and Flame insignia". It has a mix of early and late features such as the Type III receiver, the early barrel noted previously, which is fitted with a type III bayonet lug/barrel band. The receiver is fitted with a blued type 1 "U" marked, flat bolt and a late production adjustable stamped rear sight marked "I.R. CO." on the side. It is also fitted with a type II operating rod slide with the square back cut, stamped "O.U." on the inside. It is fitted with a stamped and brazed trigger housing, with a smooth unmarked push-button safety and unmarked magazine release. It is fitted with a early high wood stock that has the mid-production oval cut, oiler slot that is stamped "M-U" in the sling slot and an early two-rivet "IO" marked handguard. This mix of early and late parts is exactly correct as they used whatever was left over after production ended. It does not include magazine or sling.

Excellent with 98% of the original WWII gray-green parkerized finish overall with only minor edge and high spot wear. The top front edges of the correct blued bolt show some minor light wear from cycling. The stock and handguard are both in very fine condition with the handguard being a little darker in color with both only showing some very light handling marks. Mechanically excellent. There is a light semi-circular stress crack visible directly on the left rear side of the recoil plate. An exceptionally nice all original late WWII Underwood "E-Prefix" Presentation M1 Carbine. 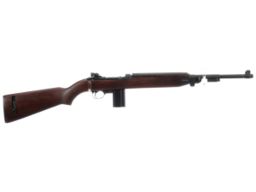 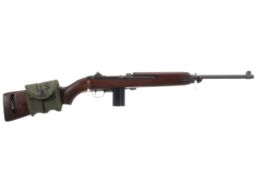 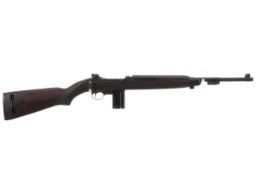 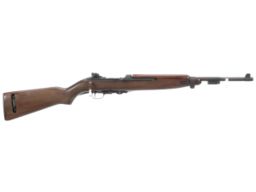 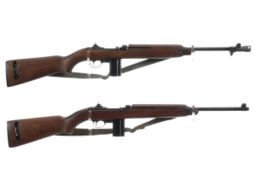 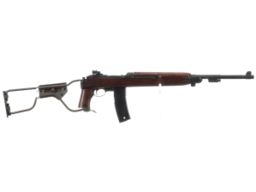