These shotguns were made in Belgium by Simonis, Janssen & Dumoulin. The underside of the barrels and watertable have matching serial numbers and Belgian proofs (pre-1893 style). The watertable and right lock also have patent markings, most clearly "Patd. June 20 1883" on the lock. The left lock is marked "The Continental." The matted, concave rib is marked "THE CONTINENTAL-.-FINE DAMASCUS" and has "J R PLATT TEXAS RANGERS" in gold inlay and a single bead front sight. The forearm and round knob pistol grip stock are checkered, the former features a contrasting tip, and the latter has a hard rubber buttplate embossed with a basketweave pattern and scene of a dog, shotgun, and shot birds. The chambers measure 3 inches with a single extractor, the choke constrictions measured .015/.006 (R/L) inches. Stock measurements: 1 3/4 inch drop at comb; 2 3/4 inch drop at heel; 14 1/2 inch length of pull. John Radcliff Platt (1862-1911) was one of the several Platt brothers that served in the Texas Rangers in the late 19th century. Their father, Captain Radcliff Platt (1822-1909), is also listed as having served as a mounted volunteer during the Mexican-American War and was a sheriff, farmer, and livery stable owner in Austin. J.R. Platt worked in the stable before he enlisted in the Texas Rangers on June 20, 1886, as a private in the Frontier Batallion in Captain Sam McMurry's Company, and left the Texas Rangers on August 31, 1891. Prior to working as a ranger, he was recorded as working in a stable. The Frontier Battalion was tasked with protecting the Texas frontier from Native American raids and outlaws starting in 1874 at the end of the Reconstruction era in Texas. Texas was very rural at the time and hampered by the depressions of the late 19th century and labor conflicts, and part of Captain McMurry's Company's duty included dealing with labor disputes at the Texas & Pacific Coal Company in Erah County.

Very fine with bright gold inlay, 80% plus original brown finish on the barrels with some fading to gray and distinct twist patterns, areas of strong original case colors, 30% original case colors and blue finish, smooth gray patina on the balance, minor oxidation, and general mild wear. The wood is also very fine and has mostly crisp checkering, and some light scratches. Mechanically excellent. 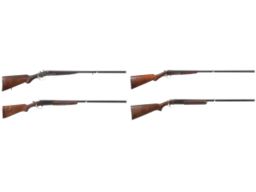 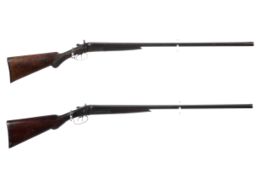 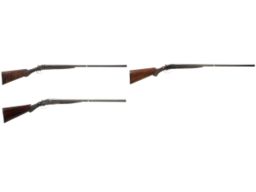 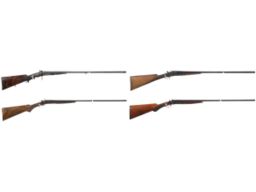 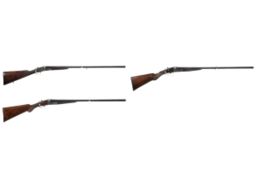 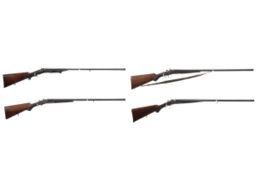