The Model 1876, debuted as the "Centennial Rifle" in 1876 during the Centennial International Exhibition and celebration of the centennial of the signing of the Declaration of Independence, was Winchester's third lever action rifle design and the first capable of firing powerful big game cartridges like the .45-75 W.C.F. designed for this model to mimic the .45-70 Government cartridge in a shorter case length. This model, particularly the First Model carbines like this one, are among the rarest Winchesters with only 64,871 Model 1876s manufactured in total by the time the model was discontinued in 1898. The carbines are popular both as an intriguing variation of this rare model and due to their use by the famous Canadian Mounties (North-West Mounted Police). The '76 was also famously popular with Theodore Roosevelt and the Texas Rangers. The included Winchester Museum letter lists this gun as a carbine received in the warehouse on February 8, 1878, and finally shipped on May 9, 1878, in a shipment of four other carbines in the same configuration. An earlier Olin Mathieson Chemical Corporation letter lists the same shipping date and notes that the Model 1876 carbines used the same rear sights as the Model 1866 muskets. It also notes that the "T" marking on the carbine might be from Albert Tilton who was an inside contractor manufacturing receivers for Winchester and also noting an assembly number "438." A third letter from the Buffalo Bill Historical Center notes that this was not the first 1876 carbine as there were 68 others received in the warehouse prior to this one, starting with sn. 601 on September 15, 1877. The barrel has a military style front sight that doubles as a bayonet lug for a socket bayonet, notch and folding rear sight with marks for 100 yards on the notch and 300 and 500 on the leaf, and the two-line address and King's improvement patent marking ahead of the rear sight. The First Model "open top" frame has no provisions for a dust cover and features a saddle ring on the left, "MODEL. 1876." on the upper tang, and script serial number on the lower tang. It is mounted with a long forearm with steel end cap and single barrel band and a smooth buttstock with curved carbine buttplate marked with an inverted "T." Provenance: The Brandhorst Collection

Very good plus with 25% original blue finish remaining mainly concentrated in the protected areas, smooth gray and brown patina on the balance, some patches of mild oxidation and light pitting, and general mild overall wear. The lightly sanded and refinished stock and forearm are both very good and have some dings and scratches, minor edge wear, and attractive grain. Mechanically excellent. Overall, a very attractive early Winchester Model 1876 Centennial Carbine. 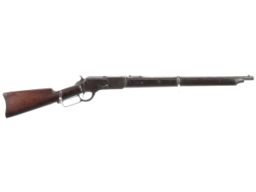 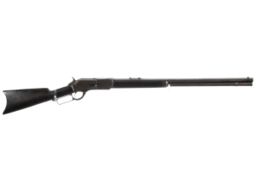 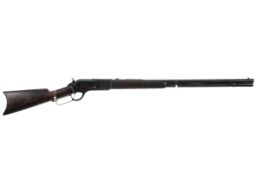 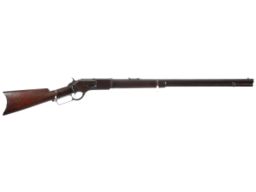 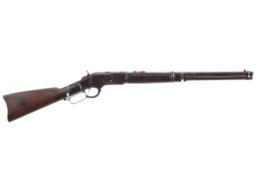 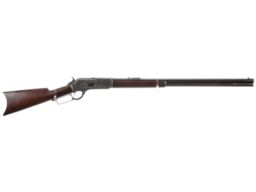