This Henry rifle was manufactured by the New Haven Arms Company in January 1864. The rifle features a brass receiver that lacks the alternate rear sight dovetail, brass buttplate with rounded heel, blade front sight with squared back, folding ladder rear sight graduated to 900 yards, buttstock swivel, and screw fastened sling hook loop. The top barrel flat is roll stamped with the two-line legend ahead of the rear sight: "HENRY'S PATENT OCT. 16. 1860/MANUFACT'D BY THE NEWHAVEN ARMS CO. NEWHAVEN. CT." The matching serial number is stamped on the top barrel flat at the breech, left side of the lower tang, lower tang, both buttplate screws, and buttplate. The trapdoor buttplate has a four-piece steel cleaning rod, and a rare Remington-UMC box of .44 Henry (flat) cartridges (14/50 cartridges) is included. The cartridge box has a green label with an illustration of the cartridge which is marked ".44 HENRY FLAT/MODEL 1866." Also included is a David's Firearms, Ltd. letter verify the authenticity of this Henry rifle that concludes it "is an untouched original Henry." The Henry rifle was one of the most advanced firearms of the American Civil War, and most of the Henry rifles manufactured by the New Haven Arms Co. were purchased by individual Federal soldiers who wanted the advantages of a 15-shot repeating rifle. Many were purchased by soldiers fighting in the Western Theater of the war, such as the 23rd Illinois Infantry. Smaller numbers were also purchased by Confederates, but most used by the Confederacy were captured. Some were issued to advanced Confederate units such as the 7th Virginia Cavalry and some of Jefferson Davis's guards.

Very good plus as "an untouched original Henry" with the barrel and magazine having an as found smooth dark patina. The fine brass has an attractive mellow appearance with the receiver having tight fitting side plates. The wood shows the typical minor dings and scratches associated with a well cared for rifle that saw years of use. Mechanically excellent. A solid original representative example of a Henry rifle showing great character. 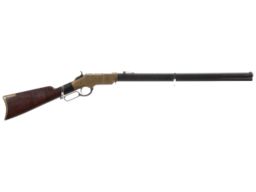 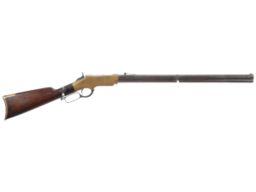 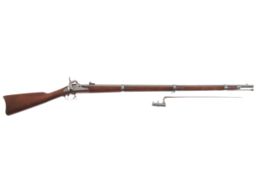 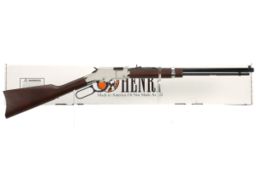