Like many in the American firearms industry in the 18th and 19th centuries, the Freund brothers Frank W. and George were German immigrants. They had various temporary shop locations as they followed the Union Pacific westward and established more permanent shops in Denver, Colorado, and Cheyenne, Wyoming, where they regularly modified firearms, particularly Sharps rifles, to fit their customer's needs. They sold rifles to the likes of generals Philip Sheridan and George Cook and Theodore Roosevelt. In addition to mechanical alterations and creating new configurations, the Freunds also designed new sights. This early Model 1874 rifle from the Hartford factory has a blade front sight and unique Freund improved Lawrence patent rear sight with improved notches. The barrel, which was shortened during the period of use, likely at a Freund shop, has the Sharps Hartford address ahead of the rear sight (partially covered), "FREUND & BRO." at an angle and "CALIBRE 44" on top at the breech. The bottom of the barrel is marked "S155741" and the inside of the forend has "155741", which is repeated on the upper tang. It is mounted with a smooth forearm and straight grip stock. The rifle in the West prior to the famous Battle of Little Bighorn when the region was still contested and conflicts with Native Americans as well as other settlers and outlaws remained part of life. Sharps rifles were preferred by many in the West because they could reliably take game and be used in defense at longer ranges.

Very good, retains 40% of the dull retailer applied blue finish on the barrel with the balance having thinned to mostly a smooth brown patina and the receiver shows a mixture of grey patina and silvered case colors, typical of a western shipped rifle such as this. The refinished wood is also very good with mild wear on the forearm and some scattered light handling marks, but also the evidence of period maintenance that would be expected from someone entrusting their life to this rifle. Mechanically excellent. A western shipped rifle with Freund Bros. improvements that are as desirable now as they were on the frontier! 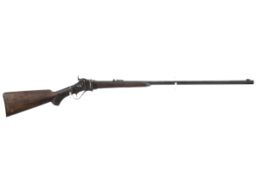 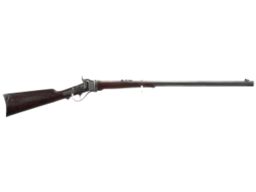 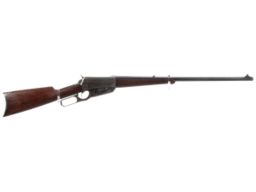 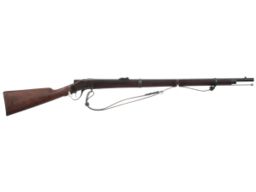 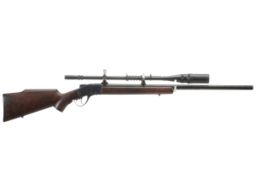 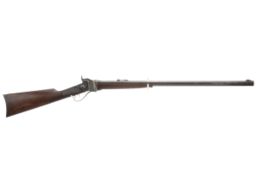