Colt introduced the .41 Colt caliber to its famed SAA line in 1885, and this caliber remained in standard SAA production until 1912. Colt author David Brown passionately summarized the .41 Colt caliber's alluring image with the SAA: "The .41s were favorites in the West among men who wanted something a bit less husky than the .45 or the .44-40, yet something still dependable for man-stopping power at short ranges. The lawmen for the most part, clung to the bigger bores; but several famous outlaws are known to have liked the .41 Colts." Through his decades of SAA collecting, Brown discovered that "the men who bought the .41 Colt Single Actions must have used them more, and harder, than did the average buyers of other calibers" as "finding one in the 'mint' condition" is extremely difficult" (see "The 36 Calibers of the Colt Single Action Army," page 146). No need to look any further as offered here is the finest black powder frame .41 Colt SAA known to exist! The accompanying factory letter confirms the 7 1/2 inch barrel in .41 caliber, blue finish, and hard rubber grips. The letter also states the revolver was part of a January 14, 1895 shipment of two guns delivered to Montgomery Ward & Co., Chicago, Illinois. The barrel is stamped with the one-line Hartford address on top and "41 COLT" on the left side. The left side of the frame has the standard two-line patent date marking followed by an encircled Rampant Colt. Matching serial numbers appear on the frame, trigger guard and back strap. Both grip panels are numbered to the gun as each panel has the partial serial number "7484" (likely a factory error being one digit off). This SAA is pictured and identified in "The Official Record of the Colt Single Action Army Revolver, 1873-1895" on page 314. Provenance: The Richard Atkinson Collection; Property of a Gentleman

Excellent, retaining 90% plus bright original high polish blue finish with thinning to brown on the balance, strongest on the grip straps. The frame and hammer retain 95% vivid original case colors. The grips are also excellent with limited handling marks and crisp checkering. Mechanically excellent. A phenomenal piece of Colt heritage, this documented black powder Colt Single Action Army Revolver in .41 Colt will without a doubt make a grand statement in any Colt or Western collection no matter how advanced. A must have for the serious Colt collector looking for only the best pieces! 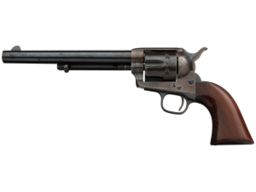 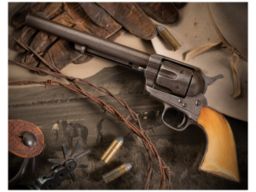 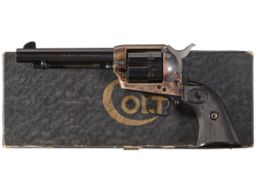 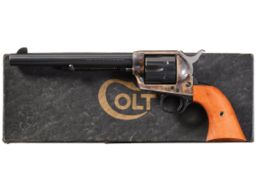 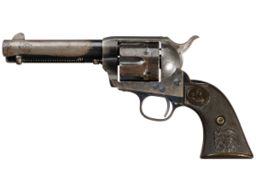 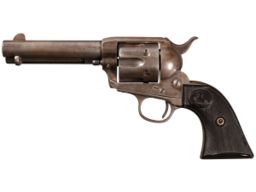