Offered here is a highly desirable, high condition, deluxe variation of the Colt Large Frame "Express Model" Lightning Rifle as manufactured in 1892. It is chambered in .38-56-255 caliber, and this caliber designation is correctly stamped in script on the left side of the barrel at the breech. The rifle is fitted with a combination Beach front sight, an elevation adjustable rear sight, and a Vernier tang peep sight. The top of the barrel is stamped with the two-line Hartford address/patent dates legend ahead of the rear sight. The left side of the frame is stamped with a Rampant Colt. A sling swivel is mounted under the magazine tube and on the underside of the stock. The forearm and pistol grip stock are checkered deluxe walnut. The stock is fitted with a crescent buttplate. The accompanying factory letter confirms the round 28 inch barrel in .38-56-255 caliber, blue finish, swivels, Colt peep sight, Beach front sight, and set trigger as well as being shipped on August 26, 1892 to the Henry Sears Co. of Chicago, Illinois. The Colt Lightning rifles were Colt's most successful attempt to compete with Winchester, Remington, Marlin, and others in the lucrative repeating rifle market but were still sold in relatively small numbers despite being very fast actions and reliable. These "Express Model" rifles were the rarest of the series, and only 6,496 were manufactured in 1887-1894 compared to nearly 90,000 each of the Small and Medium frame versions. A Colt "Express Model" Lighting rifle with deluxe checkered stock and forearm such as this example is seldom encountered and is considered a rarity in Colt collecting.

Very fine, retaining 85% original blue finish with thinning to brown on the balance. Traces of original nitre blue remain on the loading gate. Nearly all original case colors remain on the hammer. The professionally restored wood is fine with a repair visible at the filled in toe, rear of the swivel base, some minor handling marks and crisp checkering overall. Mechanically excellent. A highly attractive Colt Deluxe Large Frame "Express Model" Lightning Rifle in .38-56-255 caliber. 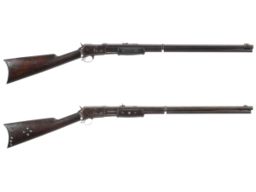 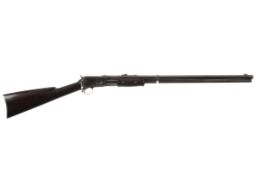 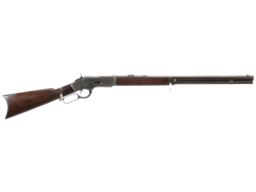 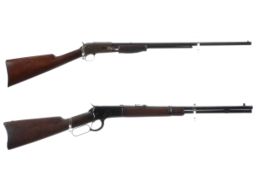 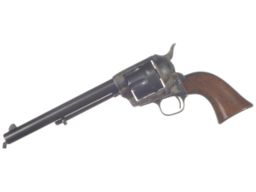 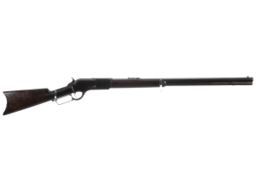