Originally up for consideration by the Netherlands Purchasing Commission as a service weapon for colonial troops in the Dutch East Indies, a large order for the Johnson Rifle was placed in 1940, but the Japanese invasion of the East Indies prevented delivery. These rifles were not able to gain interest for adoption by the U.S. Army, who favored the M1 Garand, but a small amount of them were subsequently used by the U.S.M.C. Marine Raider and Parachute Battalions in the early Makin Island, Guadalcanal and Tulagi Island hopping campaigns in the Pacific. One source reports approximately 21,400 Johnson semi-automatic rifles in total were manufactured, and approximately 750 were procured by the U.S. Marine Corps (Canfield's book). These rifles employed several unique features such as the rotary magazine which allows reloading at any time, and a recoiling barrel that has the ability to be easily removed from the rifle by hand for takedown, which allows the rifle to be stowed in a parachute jump bag. The rear, right side of the receiver is marked "CRANSTON/ARMS/CO." in a triangle and with a small five-pointed Dutch star as commonly seen on Johnson rifles, and the top of the receiver is marked "CAL. 30-'06 SEMI-AUTO./"JOHNSON AUTOMATICS"/MODEL OF 1941/MADE IN PROVIDENCE, R.I., U.S.A." above the serial number with U.S. and foreign patent date markings to the rear. The barrel locking bushing has the correct markings of "41" for the year and "30-06" on the front flat. Blade front and 1,000 meter rear sight. It has a two-piece walnut stock and forend. This example is wearing serial number "B2015" on top of the receiver and the bolt is numbered "B5362" (it was standard for numbered components on Johnson rifles to not match). Includes a bayonet with leather scabbard, 1918 dated M1907 leather sling, reproduction M1907 leather sling, canvas carrying case for an M1 Carbine grenade launcher sight, five brass stripper clips, M1903 combination tool, cleaning rope, September/October 1991 "Man At Arms" magazine containing the article "Johnson Rifle" by Bruce Canfield, and an original Johnson 1941 semi-automatic rifle manual.

Excellent, retaining 98% plus original parkerized finish with some occasional light handling marks and scratches, and some areas of very light freckling. Wood is also excellent with attractive grains and rich oil finish, a few minor chips on bottom behind the rotary magazine, and otherwise defined edges. Mechanically excellent. Included bayonet is excellent, scabbard is very fine, and the manual is very good with some light age related wear. 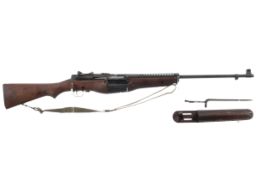 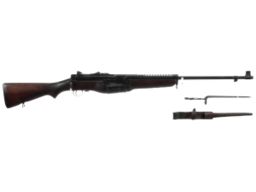 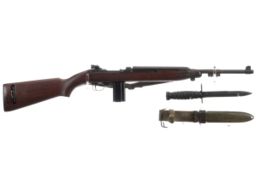 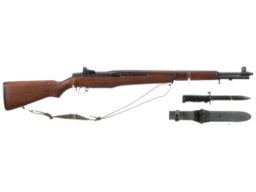 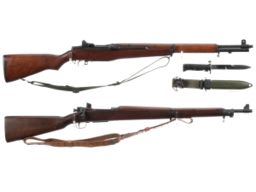 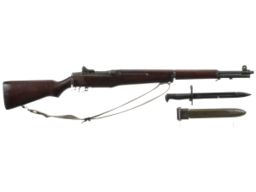