Manufactured in 1912, this very fine example of an early production U.S. military contract Colt Model 1911 pistol was part of a 500 gun shipment to the Rock Island Arsenal in Illinois on December 3rd, 1912. This beautiful example has the various transition features only seen on early production pistols. Many of these early 1911s were run to death over the course of years of hard military service, subjected to military overhaul, or just plain lost, leaving examples from the first year of military contract production scarce in any condition, let alone in very fine condition as seen in this attractive example. It has the early/transition style rounded rear sight with the narrow/thin half moon front sight blade, the left side of the slide has the very early short, two line/two block Colt markings with serifs that consists of "PATENTED APR. 20. 1897/SEPT.9. 1902. DEC.19.1905. FEB.14.1911" followed by "COLT'S PT. F.A. MFG. CO./HARTFORD. CT. U.S.A.", with the circled Rampant Colt logo stamped behind the serrations and "MODEL OF 1911. U.S. ARMY" (serifed) on the right side. The left front of the frame is marked "UNITED STATES PROPERTY" with Walter G. Penfield's "WGP" monogram inspector's mark on the left of the frame behind the trigger area, with a long trigger, wide checkered hammer, short grip safety, flat mainspring housing, checkered grips with diamond-shaped flats, "R" marked pinned base two-tone magazine and a correct early full blue barrel marked "H" on the rear of the chamber hood and "5" on the underside ahead of the lug. Includes a later storage purpose brown cardboard box.

Very fine, with 80% plus of the original Colt military blue finish, showing areas of brown and gray patina, scattered scratches/takedown lines, bright edge wear, and otherwise sharp markings in the metal overall. The grips are fine, with some light dents and screwdriver markings. Mechanically excellent. As a very fine condition 1912 production U.S. Colt Model 1911 pistol, this is considered a desirable example that would make a fine addition to any 1911, Colt or U.S. Military firearms collection! 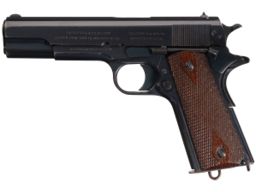 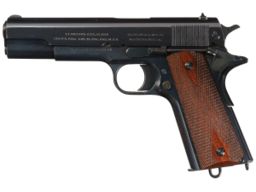 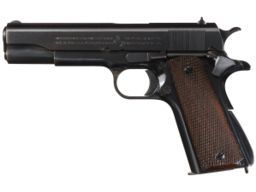 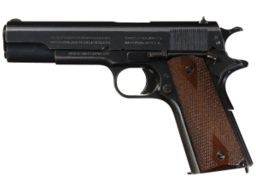 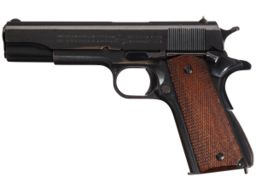 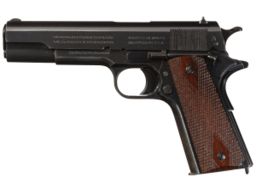