Developed at the tail end of the 1930s and early 1940s, the Smith & Wesson Light Rifle was a contender for military contracts with both the British and the Americans and squared off against the M1 Carbine as a pistol substitute for officers and support personnel. While it had some novel features, such as the dual-purpose magazine well/ejector port, it failed at trials. Large numbers of the Light Rifle were destroyed, both during testing and afterwards, including a reported incident of the British cutting their Light Rifle samples up with a blowtorch and tossing the resulting scrap into the English Channel. According to Smith & Wesson historian Roy Jinks, a number of crated, unfired Model 1940 Light Rifles were found by Smith & Wesson in 1974 and subsequently sold as collector's items. The information on page 240 of "The History of Smith & Wesson" by Jinks lists 137 Mark I rifles and 80 Mark II rifles in this found grouping. Fixed blade front and adjustable notch rear sight. The wide magazine housing serves a dual purpose; the front section holds the magazine, and the rear portion is the ejection port, so the fired cartridges are ejected directly to the ground instead of into the air. The action operates from an open bolt, with the cocking hook on the right side above the patent markings, and right side mounted rotary safety. The left side of the action is marked with the two-line Smith & Wesson address. The pistol grip stock is made of a black plastic/composition material and is fitted with a serrated metal buttplate that is marked with the serial number. Includes a leather sling. 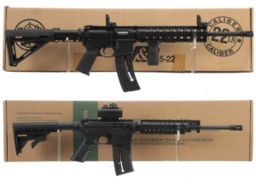 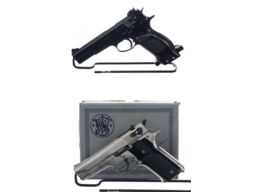 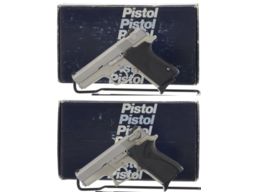 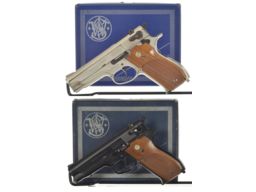 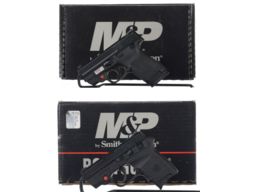 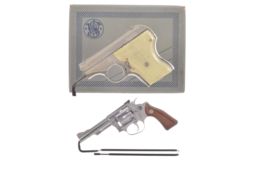