One of the most popular handguns in China, the Mauser Broomhandle would become one of the signature weapons of the Second Sino-Japanese War, with both original and Chinese arsenal manufactured Broomhandles extensively used by both the Nationalist and Communist forces against the Japanese (and later against each other). This style of Broomhandle is chiefly associated with the Nationalist-run Shansei Arsenal, upscaling the classic Broomhandle design to the 45 ACP cartridge, which was readily available due to American material support against Japan. The right side of the frame is marked with a series of Chinese characters, and the left side has the Chinese factory markings, with the left side of the chamber area stamped with serial number "2003". It has the same standard barrel mounted blade front and tangent rear sights, graduated to 1,000 meters. It is fitted with the late style small ring hammer, old style safety lever, and grooved hardwood grips. The exterior numbers are matching, with matching penciled numbers inside the grips. The underside of the butt has the stud for the lanyard loop. Included with the group is a China War Memorial Medal (a Nationalist/Republic of China decoration authorized for American wear) with matching ribbon bar.

Good, with the exterior surface having turned a mixed gray patina, with a few small areas of shallow pitting and mild handling marks overall. A mixed brown patina is present on the grip frame under the panels, with a small void in the top of the front strap, likely a factory forging error. The grips are good, with some mild wear and dings. Mechanically very good. 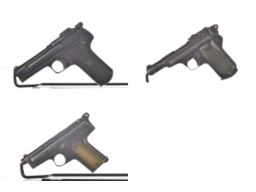 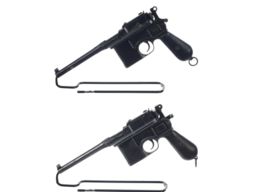 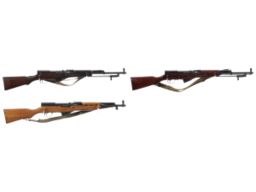 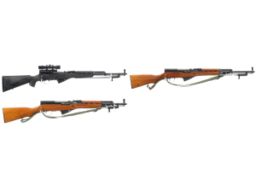 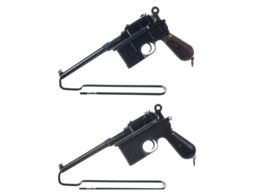 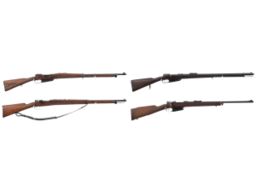