This is an extremely rare Vietnam issue Model 870 Mark 1 shotgun. Officially adopted by the U.S. Marine Corps in Spring of 1969 after extensive trials at Quantico, signing a contract with Remington on May 13, 1969 for 3,230 Mark 1 shotguns. The contract delivered 870 Mark 1 shotguns are noted in the serial range S08134V-S127697V, in which this example is bearing its own special serial number in a different range which is explained in its included letter of provenance from previous owner and retired Remington Arms Company employee, William H. Forson, Jr., who held a number of different important managerial job titles with the company. In his letter, it states, "I recall Norm [Remington coworker that was Manager of Law Enforcement and Government Sales] telling me about the Mark I and the Marine Corps contract. This shotgun was likely from the trial and pilot run at Ilion and Norm ended up with it." In the book "United States Combat Shotguns" by Bruce Canfield (pg 155) it states "One of the earliest combat uses of the Mark 1 was in the hands of the Marines during the Mayaguez affair. This incident occurred in May of 1975 during which an American ship was captured in international waters by hostile Cambodians. The Mark 1 was a key weapon employed by the Marine boarding party which retook the ship and the subsequent operations against the Cambodians on a nearby island. From all indications, the Model 870 Mark 1 immediately proved its worth as a combat weapon." Equipped with blade front and express adjustable rear sights. This shotgun features a parkerized finish, bayonet adapter for mounting the M7 bayonet as used on the M16 rifle, and is the first military issued shotgun with a seven-round magazine extension. Left side of barrel marked "12 GA. FOR 2 3/4 OR SHORTER SHELLS" and modified choke marking at the left of the breech. Right side of barrel marked with two-line Remington address and patents. Left side of receiver marked "Remington/1242256V" and "Wingmaster/MODEL 870". Smooth oil finished forearm and pistol grip stock with a black plastic serrated buttplate. 14 inch length of pull. Also includes an olive drab green canvas web sling, M7 bayonet, and a copy of a Remington Ilion shipping report listing the breakdown of firearms shipment totals by year with 3,231 contract delivered shotguns highlighted for the year 1969.

Excellent, retaining 97% plus original parkerized finish with some light handling marks, and 95% arsenal anodized finish on the aluminum components. Wood is excellent with defined edges and some light handling marks. Mechanically excellent. Included bayonet is very fine. An exceptional example of a U.S.M.C. trials Mark 1 shotgun with provenance from a respected Remington employee! 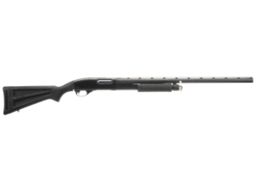 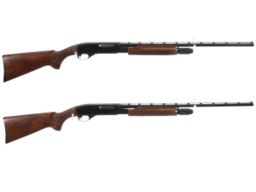 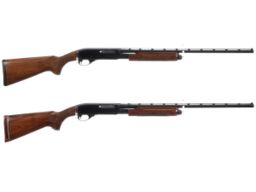 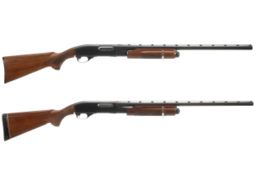 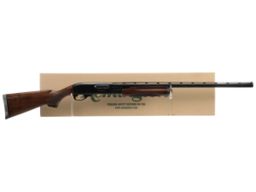 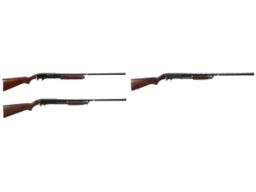