This is a desirable example of a World War II M1C Garand sniper rifle manufactured by Springfield Armory in March of 1945, subsequently reconfigured into a U.S.M.C. MC-1 type sniper rifle. During World War II (late 1944-mid 1945) approximately 4,000 M1C sniper rifles were manufactured by Springfield Armory, and most were refurbished during the Korean War. Hundreds were transferred to NATO allies in the 1960s and hundreds more destroyed in the 1980/90s. Following the Korean War, the Marine Corps adopted the new/improved Stith Kollmorgen MC-1 4X telescopic sight with the larger Griffin & Howe mount adapted for use on the M1C sniper rifle. The Marines designated these rifles as the "1952 Sniper Rifle" and issued them in limited numbers from 1954 through 1967. Blade and peep sights, "DRC" windage knob, "3-S A 8 x4" (x is likely a 5 that has been struck over with an upside down P firing proof) marked barrel, and "SA" bolt and trigger housing. The receiver has been drilled and tapped for the Griffin & Howe pattern post and screw arrangement affixed with the unmarked Springfield Armory manufactured scope mount numbered "3713217". The ring base bears the Griffin & Howe address on top, "T4" is stamped on the back of each ring half, and the scope is marked "MC1193-P" on the tube to denote it as being part of the original first U.S.M.C. contract for these scopes, and "4X DOUBLE STITH MOUNTS S.A. TEX./KOLLMORGEN OPTICAL CORP. BROOKLYN. N.Y. PAT. PEND." around the objective. The scope is fitted with windage and elevation knobs and the standard fine cross-hair reticle. Glass bedded stock with a circled "P" proof mark on the front of the pistol grip (partly obstructed on the bottom edge by a gouge), and a checkered steel buttplate. Includes M2 cone flash hider, Storm Queen rubber scope lens covers and "MRT/1 52" leather cheek pad. 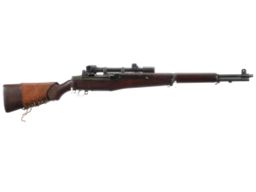 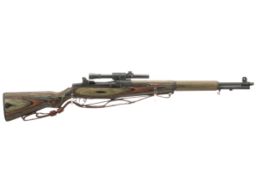 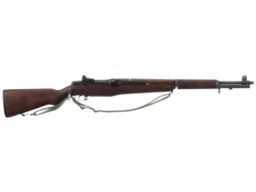 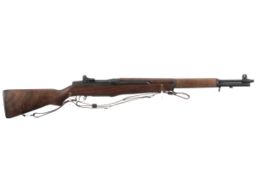 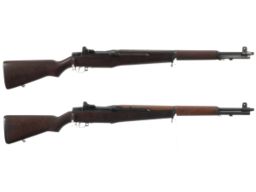 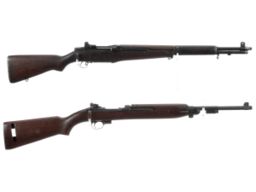