Perhaps no other lawman conjures up iconic imagery of American frontier style justice more than Wyatt Earp. His exploits have been lionized in dime novels and period newspapers and later in film and television ever since the first shots to the gunfight at the O.K. Corral rang out. Earp detested the fame, stating "notoriety had been the bane of my life. I detest it, and I never have put forth any effort to check the tales that have been published in which my brothers and I are supposed to have been the principal participants. Not one of them is correct." Nevertheless, his status as a cultural icon of law and order has propelled him to mythical status of what an American hero should be that continues to this day. His reputation, whether historically accurate, fictionalized or a combination of both, has earned him the reputation as “the Old West's toughest and deadliest gunman.” Offered here is no ordinary nickel plated, pearl handled S&W .38 Military & Police Revolver as its ownership traces back to this legendary Western lawman, Wyatt Earp. The revolver has remained with Earp’s descendants until now. The extraordinary and historic ownership of this revolver is documented in the accompanying notarized statement of provenance signed by Wyatt Earp descendants Elizabeth Jane Earp Holmes and William Stanley Holmes. The revolver’s history of Earp family ownership is as follows. According to William S. Holmes, Wyatt Earp (1848-1929) personally gifted this revolver to his grandfather Stanley Maxwell Earp (1890-1967), the son of George Washington Earp (1864-1960). George Washington Earp was Wyatt Earp’s first cousin. Holmes acquired the revolver from his mother, Elizabeth Jane Earp. Elizabeth was Stanley M. Earp’s daughter. While in his possession, Stanley M. Earp had his photo taken with this revolver for a local Detroit newspaper. The photograph was used in an article where Stanley reminisces about his famed frontier lawman relative and his thoughts on the then recent vandalism to Wyatt’s gravesite. In the article this revolver is identified as Wyatt Earp’s “six-gun” with “pearl handles.” A copy of this article (date unknown) is included. The accompanying factory letter lists this revolver with a 5 inch barrel, nickel finish and checkered walnut square butt grips when it was delivered to famed Fort Worth, Texas, retailer Wolf & Klar Co. (no shipping date is provided). In the letter S&W historian Roy Jinks unfortunately gets the period aftermarket grip material wrong. Nonetheless, his conclusion that the grips are period still stands true. These grips are those fitted to the revolver in the Stanley M. Earp newspaper photo. The back of the right grip panel has a label hand marked in red ink “Edward/Robert/Leach” and “8/18/1925.” Besides the pearl grips, the revolver has standard S&W markings and matching serial numbers on the butt, cylinder, and barrel. Provenance: Wyatt Earp; Stanley Maxwell Earp; Elizabeth Jane Earp Holmes; William Stanley Holmes

Excellent, retaining 98% plus bright original nickel plating with a cylinder drag line. 95% original case colors remain on the hammer and trigger. The grips are fine with a couple chips near the bottom, otherwise highly attractive fiery colors. Mechanically excellent. It is not often that we catalog artifacts owned by historic Western figures as documented by family descendants. This is a great opportunity to acquire a family documented piece of the Wyatt Earp legend! 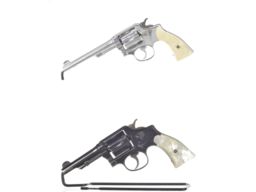 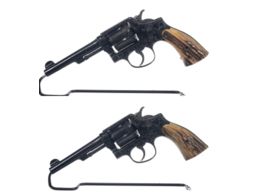 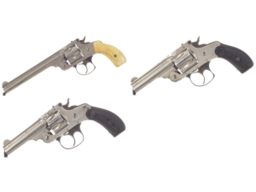 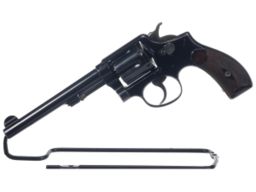 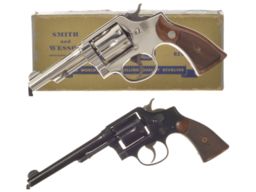 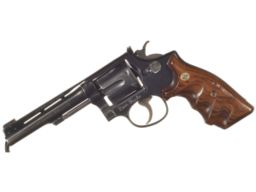