Manufactured in 1917, is a fine example of a Danzig Arsenal Gewehr 98 Mauser sniper rifle as issued by the Imperial German Army and deployed on the Western Front of World War I. These rifles were selected by the factory and later modified by the addition of the scope bases designed for the early German sniper scopes in a few different variations, with this example correctly wearing an Oigee (Berlin) made Luxor 3x scope with a double claw front mount, double claw rear base/mount offset to the left, and a turned down bolt handle. In addition to the improvement to ranged precision fire, the scopes were also noted to act as a form of passive light amplification, allowing German marksmen to deliver aimed shots from long range in light considered too weak for iron sights. The bolt and components, barrel bands, rear sight, barrel, trigger guard, trigger guard screws, floorplate, stock and buttplate are serial numbered to match the receiver. Various German acceptance proofs marked on the receiver, components and buttstock. "Gew. No. 5781t" inscribed on the left of the scope body, "OIGEE.Berlin" and "LUXOR 3x 67792" on either side of the windage base, and "5781" on the claw ring bases. Includes muzzle cover.

Fine, retaining 60% original blue finish with some scattered patches of light pitting and smooth brown patina on the balance. The receiver and bolt remain bright with some patches of light pitting. Sharp markings in the metal overall. Stock is also fine with defined edges, some light scratches, a few small scuffs and chips, and crisp inspection stampings. Scope is very fine, 85% original blue finish remains with some scattered light freckling, and clear optics. Mechanically excellent. This desirable example of an Imperial German Gewehr 98 sniper rifle would make an excellent addition to any Mauser or World War I collection! 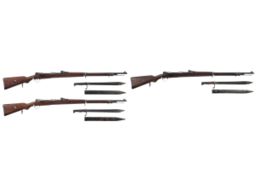 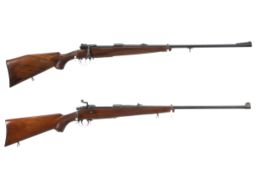 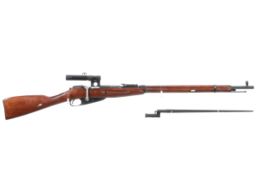 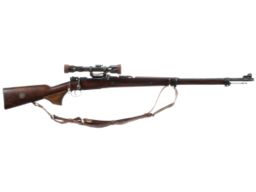 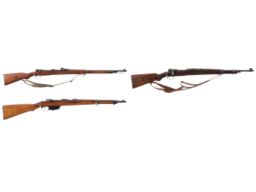 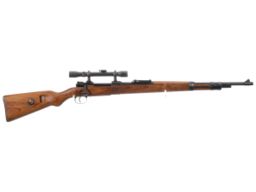