James Millar patented this system in 1829, and brothers James and John Millar manufactured them in Rochester, New York, in the 1830s. The surname was later written as Miller. At least 15 gunsmiths ultimately made revolving rifles under the Miller patent into the mid-19th century, but William Billinghurst, who worked with the Millers and is identified as buying out their patent in 1841, produced a significant percentage of the total Miller patent revolving rifles leading them to also be known as Billinghurst revolving rifles. It is estimated that only a few hundred were produced in total. Nonetheless, surviving examples of revolving rifles using the Miller patent show a wide variety, and each is a glimpse into 19th century craftsmanship and design. R. L. Wilson recognized the high quality of this rifle as "an important example of the state of gun-maker's art in America c. 1830. Built as a show piece". This early rifle is certainly one of the most deluxe Miller patent revolving rifles ever made. It features exceptional engraving, gold inlaid accents, a highly figured walnut stock, and silver ramrod entry pipe, trigger guard, buttplate, and toeplate. The cylinder is has grooved panels for an easier grip, and the chambers are numbered 1-6. A small switch at the bottom releases the cylinder for manual rotation and then locks it into place. The sighting flat on the browned barrel is marked "J. & J. Miller. Rochester" in Gothic lettering. The barrel also has blade and notch sights and a burst pattern engraved ahead of the rear sight. The top strap is engraved "Patent" in ornate script. The action components have floral, border, and scroll engraving. The hammer has a bestial head designs. The ramrod entry pipe is engraved with a burst pattern and border. The trigger guard has floral and border patterns and a scene with a rabbit. The toe plate has floral and border engraving and a detailed pineapple finial. The buttplate has a pair of birds, floral designs, a burst pattern ahead of the iron heel, and an ornate bored. The nicely figured forend has a horn cap and gold escutcheons. The figured buttstock has cheekpieces on both sides, a highly detailed engraved gold bow and quiver of arrows inlay on each cheekpiece, a small blank gold initial panel on the wrist, "C. Emerson" inscribed gold inlay on the left flat, and checkered wrist. Documentation on "C. Emerson" is lacking, and there were many men by that name alive in the period, such as Charles B. Emerson (1817-1891), a successful businessman from Haverhill, Massachusetts, and Charles Chauncey Emerson (1808-1836) and Charles Milton Emerson (1810-1881), two of the younger brothers of Ralph Waldo Emerson. These brothers went to Harvard like their famous older brother. 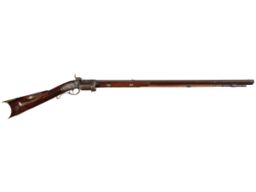 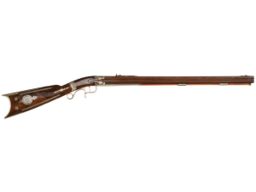 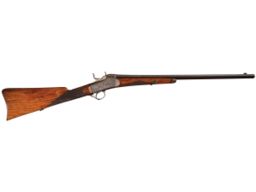 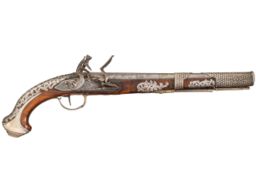 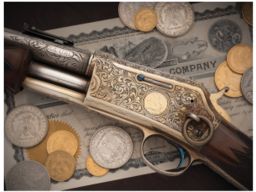 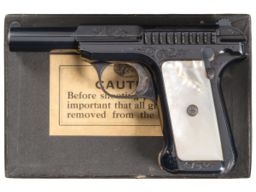