The Third Model Dragoon can be quickly distinguished by its round trigger guard and was the most widely used of Colt's massive "horse pistols" that began with the famous Colt Walker. Around 10,500 Third Models were manufactured between 1851 to 1861. Many of these were used in the Old West and during the Civil War. This late Third Model Dragoon was manufactured in 1860. The back strap is period inscribed "C.W. Howell" in gothic style. A Major Charles Wagoner Howell has been found to be a likely match for the inscription. An included scanned copy of a New Orleans, Louisiana paper dated April 6th, 1882 states, "Major Charles W. Howell, of the United States Corps of Engineers, died in this city Wednesday [April 5th, 1882] morning. Major Howell was appointed to the United States Military Academy from Indiana, September 1, 1859. He graduated from the Academy with high honors, June 11, 1863, and such was the demand for scientific officers at that time, that he was made a First Lieutenant of Engineers on the day of his graduation, and was at once assigned to duty in the field with the Engineer Battalion, Army of the Potomac, then engaged in the Pennsylvania campaign. His first important work was to contract a bridge over the Potomac at Berlin, Md. Thereafter Howell was engaged in all campaigns of the Army of the Potomac, from the movement from Warrenton, Va., in July, 1863, to the surrender at Appomattox in 1865. He was made Brevet Captain and Brevet Major August 1, 1864, 'for gallant and meritorious services during the campaign from the Rapidan to the James, and in front of Petersburg.'" The barrel has a nickel-silver front sight blade and is roll-stamped with the one-line New York address (faint). The cylinder has the standard scene with U.S.M.R. and Colt's patent markings (faint). Matching full or partial serial numbers marked on the barrel, frame, brass trigger guard, back strap, loading lever, cylinder, arbor pin, and wedge. Also includes a scanned copy of the Historical Register of the U.S. Army listing the aforementioned Charles Wagoner Howell, and a scanned copy of an 1868 dated photo of Howell.

Very good, exhibiting a mix of gray and brown patina with scattered moderate pitting, and light wear to the markings from period use. Brass displays bright as lightly cleaned, with 10% original silver finish mostly concentrated on the inside of the trigger guard, and clear period inscription. Grips are also very good as re-oiled with some scattered light scratches and nicks, and a small chip at the front of both bottom edges. Mechanically excellent. 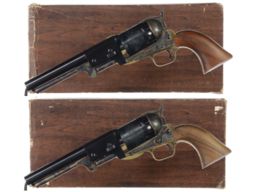 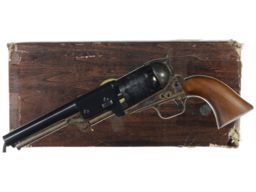 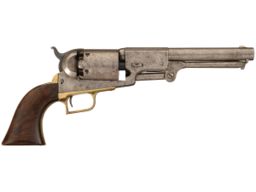 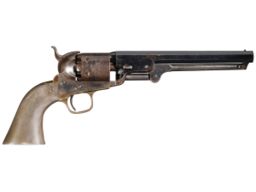 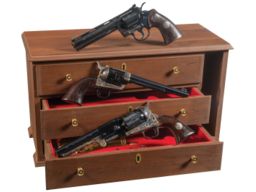 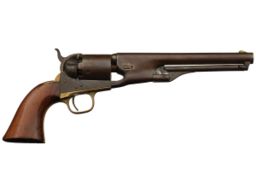