Approximately 11,000 of these Kerr patent revolvers were manufactured by the London Armoury Company between 1859 to 1866, and many were known to have been exported for use by the Confederacy during the American Civil War, with some stopped by the Union blockade. These revolvers were well regarded by the men who carried them. This example does not carry the "JS/anchor" marking found on known Confederate issued examples, although the lack of said marking does not necessarily preclude it from Confederate use. The Kerr revolver's cylinder can be rotated by pulling the trigger, but the hammer must be cocked manually and also revolves the cylinder when it is. The use of an older style back action percussion lock meant that these revolvers were easier to work on and repair than more complicated revolver actions. "L.A.C" London Armory Company marking followed by "crown/GP" and "crown/V" proofs on the upper left barrel flat, "LONDON/ARMOURY" marked on the left of the frame, "KERR'S PATENT. 10,927." on the right of the frame, "LONDON ARMOURY Co." on the lock plate, "10,927" and faint London crown proofs marked on the outside of the cylinder, "J522" marked on the frame under the cylinder, "522" marked on the front face of the cylinder, right of the trigger and inside of the trigger guard.

Very good with a few areas retaining 20% original blue finish and mostly smooth gray patina on the balance with scattered moderate pitting and mostly clear markings with some light wear to the proof marks on the cylinder. Grip is also very good with some light wear areas, some crazing at the edges, a minor chip on the right beneath the edge of the lock and otherwise defined checkering. Mechanically fine. 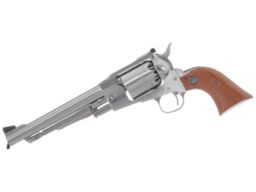 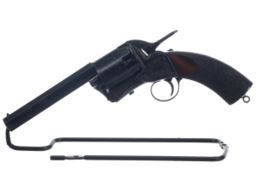 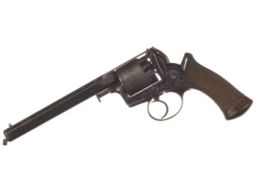 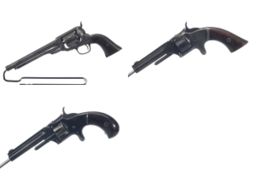 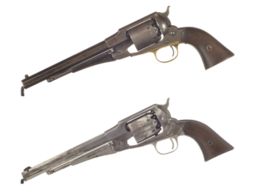 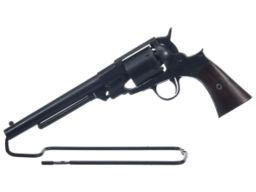