This magnificent painting is by Philip R. Goodwin (1881-1935), the renowned American wildlife and outdoors illustrator and painter. He is best known for his paintings depicting life in the outdoors, whether it be animals, hunting, fishing, or adventure. Goodwin was born in Connecticut, and by age 11 had sold his first illustration to Collier's magazine. He studied his craft at the Rhode Island School of Design, the Art Students League in New York, and at Drexel Institute of Art, Science and Industry. In 1903, at the age of 22, Goodwin illustrated the legendary novel by Jack London, "The Call of the Wild", and later illustrated Theodore Roosevelt's "African Game Trails". In 1904, he opened a studio in New York, where he created imagery that was used in numerous magazines of the time. From this studio, Goodwin was also heavily involved with illustrating and painting numerous commercial advertisements for Winchester and Marlin, and many of his other works feature firearms from these legendary American companies. This specific painting is based on an illustration done by Goodwin in 1904. The illustration was presented in Leslie's magazine also known as "Leslie's Weekly", and was paired with a short story written by Holman F. Day, which was titled "In The Honest Woods", lending its title to the painting which is called simply, "Honest Woods". The story involves a reverend doctor Ransom Wallace on a hunting trip in the wilderness, who leaves his group to hunt alone, becoming terribly lost and without a fire through the night. The next day the reverend wanders to a lake where he discovers a cabin where he is rescued by two hunters from New York City and their guide. While enjoying the food and comfort provided by the three men, the reverend soon realizes the guide is someone he has known from his past, something the guide also realizes. The tension finally comes to a boil as the guide calls the reverend outside to speak to him as men, the reverend refusing. The story leads the reader to believe that whatever past the two have, the guide has every intention of killing the reverend for what he had done. Wallace is finally convinced to join the guide in the canoe, appearing to have accepted his fate. The next morning, the guide opens up to the two hunters in his care, sharing with them the story of the reverend stealing away his wife who had a taste for finer things than the guide could provide. He also shares with the hunters that not only did he not kill the preacher, but sent him on his way in a row boat, with a bag of pearls collected by the guide that were worth $1,000. The hunters are shocked by the restraint and mercy shown by the guide, claiming he must be a saint. To this the guide replies, "No, a saint would not have kneeled there in the alders when he rowed away, jacked a shell into the chamber and taken aim the whilst he growled, 'Damn ye, I can't let ye go!' No, that wasn't saint-like. Why, gentlemen, if I hadn't had the sense to ram that rifle-butt down into the lake and hold it there, I'd have bored him as I would a buck deer." The two hunters continue to insist that the guide is surely one of "God's elect", but the guide corrects them. He tells them: "I wish you wouldn't say such things—and I knowing what's inside me all the time, if anything I did was square, it's only that the old woods, the great, wide, honest, open woods, have been talking to me all these years, Mr. Manning and Mr. Ballou. I've been alone with them a long time, and it's done me a mighty heap of good. And to-day I'm hot and bitter and swearing and cursing inside—wishing now that I'd put a forty-four between those whisker tufts—sorry I let him go. I'm an awful man, gentlemen, inside me. I figure 'twas only accident I let him go, after all. But if you'll hunt alone to-day, I reckon I'll go out and let the woods talk to me—the big, generous, soothing, crooning, honest woods. And then I'll come back all right to-night, gentlemen,—all right to-night!" This painting depicts the moment the guide forces himself to let his anger and pain from the past row away, not necessarily a moment of forgiveness, but a moment of sympathy. A moment of sympathy given to one who may not have been deserving of such, and a moment of closure ending years of torment and pain. It shows the guide kneeling at the bank of the lake, his Winchester First Model 1873 rifle poised in hand, straining every fiber of his being not to raise it and shoot the man that had stolen his love from him and caused him so much anguish. Even in the distant background, the reverend in the row boat can be seen hanging his head in shame. It is signed in the bottom right "Philip R. Goodwin/1909". The visible portion of canvas measures 23 3/4 x 15 1/2 inches and the frame measures 30 x 21 7/8 inches. The title of the painting, "HONEST WOODS" is faintly written on the lower back of the frame and there are some faint words hand written on the backing of the canvas which are indecipherable. It is a truly masterful piece by one of the most legendary artists of the American outdoors.

Exceptionally fine canvas overall, retaining nearly all of its vibrant original color with some scattered very light scuffs and smudges, and otherwise minimal storage wear. The frame is fine with some mild wear and some scattered minor handling/storage marks. Do not miss this chance to own an iconic piece by one of America and Winchester's most legendary outdoors artists! 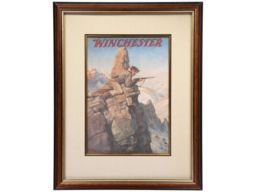 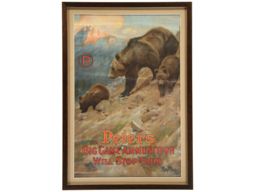 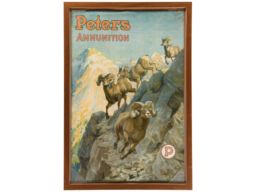 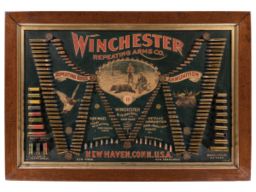 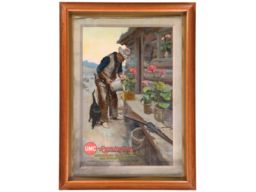 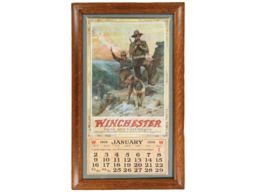