In the included factory letter this revolver is confirmed as a rare commercial Schofield that was shipped on September 5, 1878 and delivered to M.W. Robinson of New York City with a nickel finish. In the letter S&W historian Roy Jinks states "the engraving was done in New York City." As a commercial variation the revolver correctly lacks U.S. sub inspector marks and "US" marking as found on martial contracts. These rare civilian variations of the desirable Second Model Schofield were manufactured in 1876-77. Estimates place the number of civilian guns made at approximately 650 (see Supica and Nahas' "Standard Catalog of Smith & Wesson" for further information). The New York engraving consist of scrollwork and zig-zag line and dot motifs which covers 75% of the surface. The butt has a period added lanyard ring that partially obscures the serial number. Matching serial numbers appear on the butt and cylinder. The revolver was featured on the cover of the February 1997 issue of the "Gun Journal" (issue included), pictured in "Guns of the NRA National Sporting Arms Museum" on page 233, Supica and Nahas' "Standard Catalog of Smith & Wesson" on pages 22 and 53 of the 3rd edition and pages 63 and 101 of the 4th edition, and Dean Boorman's "The History of Smith & Wesson Firearms" on page 107 where it is noted that "period engraved Schofields are quite scarce," and loaned to the NRA National Sporting Arms Museum, April 2013. Provenance: The Supica Collection

Very good as New York engraved, with 30% of the nickel plating remaining with a smooth gray patina of a well traveled sidearm on the balance, the barrel cleaned and buffed leaving thinned engraving long ago. This decorated revolver certainly spent a lifetime as a working man's gun, proving that all art is not just for looks! The well weathered, repaired and chipped grips show similar character. The engraving remains visible. Mechanically excellent. 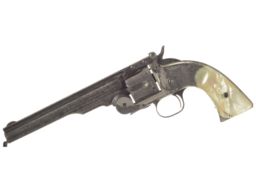 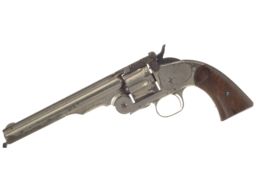 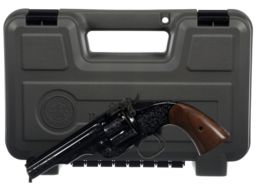 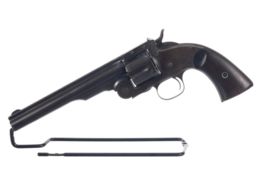 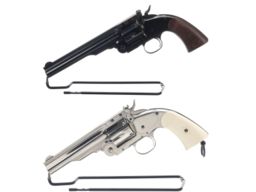 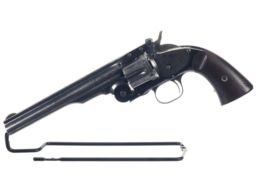