The Colt Bisley Revolver was Colt's target design modification of its best selling SAA. It was produced in many popular calibers, but only 18 standard frame Bisleys were produced in .32 S&W (see David Brown's "The 36 Calibers of the Colt Single Action Army," page 198). Even the finest collections are missing a .32 S&W Bisley! The search is over as here is one of the 18 standard frame Bisleys in .32 S&W. As David Brown explained, "The .32 S&W Single Action was made on special orders only, and for that reason is another of the rare ones. Only 97 Colt Single Actions were made in this caliber in Standard and Bisley Models." There is a "star" stamped on the right rear trigger guard indicating that the gun was worked on at the factory, but the gun is "all Colt" and all serial numbers match. Per our consignor: "This gun comes from a collection dating back to the 1940s. The original collector sent many guns back to the factory for internal adjustments and tuning. However, he kept detailed records of the Colt work on each gun. His notes on this gun clearly state that the gun received a new hammer spring. The gun's finish is entirely original." The factory letter confirms the 7 1/2 inch barrel in .32 S&W and blue finish with the type of stocks not listed. The factory letter also states the revolver was shipped to M. Hartley & Co. of New York City on March 4, 1901. This was a single gun shipment. The barrel has the one-line Hartford address on top and "(BISLEY MODEL) FOR 32 S&W CTG" on the left side. the left side of the fame has the standard two-line patent dates marking followed by a Rampant Colt. The matching full serial number "206477" appears on the frame, trigger guard, and back strap, and the matching partial serial number "77" is marked on the back of both grip panels. Includes a floral tooled leather holster. Provenance: The Gary Burghoff Collection

Very fine. The barrel and ejector rod housing retain 75% faded original blue finish, the cylinder retains 60% original blue finish and the grip straps retain 40% original blue finish with thinning to brown on the balance. 30% original case colors remain on the hammer and frame. There are a few patches of pitting on the frame and cylinder. The grips are also very fine with overall crisp checkering. Mechanically excellent. The holster is fine with minimal wear. This is an extremely rare chance to acquire one of only 18 standard frame Colt Bisley Model Revolvers. It is a must have to truly complete a SAA collection. 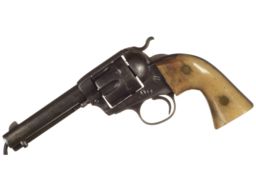 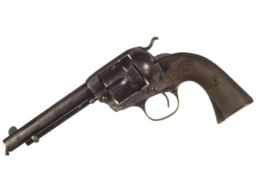 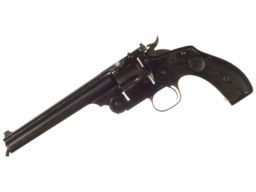 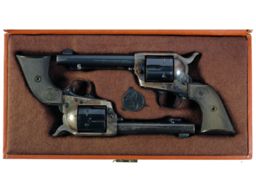 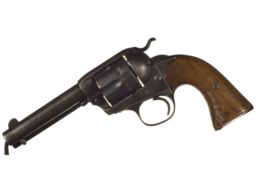 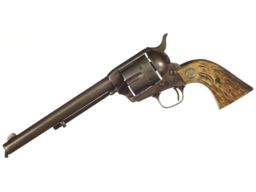