This unidentified cannon exhibits styling of naval guns from the early 18th century until the early 19th century. With a bore diameter of approximately 3 inches it would have fired approximately 3 pound shot. The two stage barrel is approximately 41 inches long from muzzle to cascabel with a reinforcing band toward the flared muzzle and one on either side of the touch hole. The trunnions are unmarked. Included with it is a 1976 article from the Darien (Connecticut) News-Review about a Harry S. Street (Great Grandfather of consignor). The article discusses a cannon which had been in possession of Street's Great Grandfather purchased it from the Brooklyn Navy Yard when some old ships were being dismantled. This unnamed Great Grandfather had the cannon mounted on a carriage, and being a Democrat, is said to have wheeled it around town, firing it off to celebrate a Democrat being elected president. At the time, it appears that Darien, Connecticut was a strongly Republican area, whose residents did not take kindly to such celebratory behavior. Some time in the late 1850s to early 1860s a group of these disgruntled Republicans hatched a grand old plan to steal the cannon, which they did, and proceeded to throw it in the Five Mile River. Years later the son of the original owner happened to snag a line from his oyster boat on the cannon, pulled it up, and returned it to his father. His father mounted the gun back on its carriage and continued celebrating Democratic victories as he had before. This time the Republicans had had enough, and somewhere around the early 1900s, again stole the cannon and buried it in a basement covered in concrete. Years later Harry Street discovered the location of the cannon and asked permission to dig it up, which was initially refused by the basement owner. Thankfully the basement owner finally gave in, writing in his will, that for a fee of $10 to his estate, Harry would be allowed to exhume the cannon. From there the gun stood guard in Harry's lawn, and then his son's lawn, before arriving here for us to offer to you. It is hard to say what stories this gun would have to tell of its naval career, but it certainly appears to have had a retirement full of excitement!

Relic condition showing a mixture of black and grey paint finishes, brown patina, oxidation, and some heavy pitting associated with being submerged and buried for some time. A historical piece with a great story that would enhance any gun room! 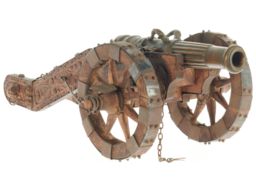 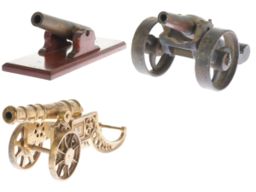 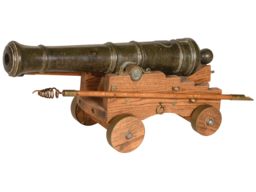 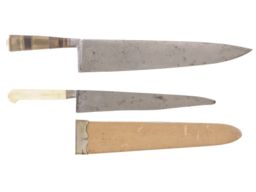 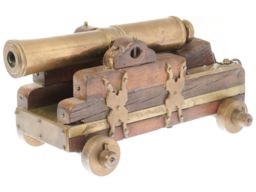 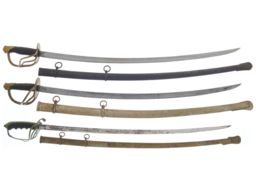