This rare revolver is one of only 700 Colt "English" Dragoon revolvers manufactured between 1853 and 1857. These revolvers were built from parts manufactured at the Hartford factory that were then finished and assembled at Colt's London factory. These are among the rarest of the larger Colt "Horse Pistols" descended from the famous Colt Walker revolver. Of the 700 London Dragoons, it is estimated that around 200 were returned to Hartford for use in the American Civil War. This revolver has classic English scroll engraving with floral accents, entwining patterns on the upper barrel flats, "COLT'S - PATENT" inscribed in a banner on the left of the frame in place of the usual stamped marking, and a bestial design along the top of the hammer. The barrel and cylinder have London proof and view marks. The barrel has a German silver blade front sight and ""[ADDRESS SAML COLT NEW YORK CITY}" marked on the top flat. Matching serial numbers are located on the loading lever, barrel, frame, trigger guard, butt, wedge, arbor pin, and cylinder (over-stamped). There is also a "2" marking above the serial number on the barrel lug. The grip is checkered and has a raised relief carved star with a coiled rattlesnake on the left. The side and lower points of the star are inscribed to read "Don't Tread on me." It comes in an English style fitted case with a cleaning rod, balls, bag shaped American Flask & Cap Co. flask, W. & C. Eley cap tin, oiler, and a brass ball and bullet mold with a "COLTS/PATENT" marked iron sprue cutter. The revolver was featured in the March 1955 Issue 57 of The Texas Gun Collector where it is noted as having been displayed at the Ohio Gun Collectors Association Meeting in Cincinnati on April 2 and 3 of 1955. "The serial number is 35 and you will note this piece has ivory checkered grips with the 'Lone Star' in relief and a coiled rattlesnake in the center of the star." The revolver is likely one of the 73 engraved Hartford-English Dragoons shipped to Joseph C. Grubb & Co. in Philadelphia in September 1861. Some of the engraved Hartford-English Dragoons we have examined have had low serial numbers, but this one is the lowest. Given the revolver's grip, it would appear this revolver was sold to a Confederate from the "Lone Star State." In addition to Texas, the states Louisiana, Mississippi, and North Carolina also incorporated a single star. The rattlesnake and "Don't Tread on Me" from the Gadsden Flag of the American Revolutionary War were adopted by members of the secessionists very early on and then used by some within the Confederacy. Many fighting for the Confederacy saw themselves as continuing the fight for the values of the American Revolution despite the Confederacy being openly formed based on the idea that all men are not created equal (see the Cornerstone Speech and secession documents). Union propagandists also seized on the imagery and incorporated rattlesnakes as symbols for the Confederacy and Confederate leaders and often showed it being defeated by a bald eagle representing the Union. Though we do not know more about the individual who owned this fascinating revolver, it is a very rare example of a revolver from Samuel Colt's failed London venture that found its way back across the pond where Colt's "Horse Pistols" were far more popular. Provenance: The Tom Spencer Collection, The William Locke Collection, The Raymond J. Walsh Collection; Property of a Gentleman

Very good. The grip frame retains patches of the original silver plating in the protected areas and has aged patina on both the silver and the exposed brass. The balance of the revolver has been polished and displays a mix of silver-gray and gray patina along with crisp engraving, some patches of mild pitting, and generally mild age and storage related wear. The grip is also fine and has distinct checkering and carving with some softening, moderate handling wear, a strike mark and small chip on the left side, minor age cracks in the butt, and attractive natural aged coloration and grain. Mechanically fine. The relined case and accessories are very good and have mild age and storage related wear, including some repairs on the case interior and dents. The is a very attractive and interesting cased set that likely saw use in the American Civil War. 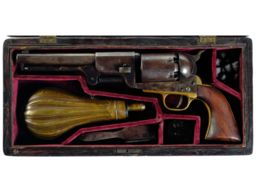 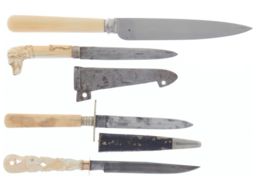 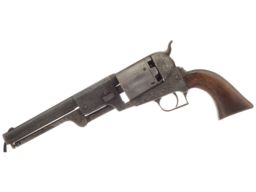 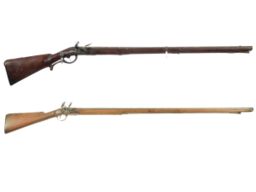 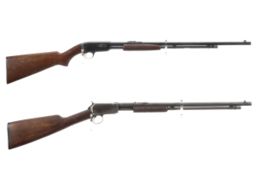 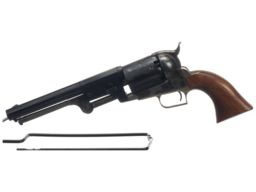