This incredible sword is the third item presented to Union General Daniel Edgar Sickles (1819-1914). While the prior two historic artifacts date to after the Battle of Gettysburg, this stunning sword dates to near the beginning of his Civil War career. He proudly wore this sword when he posed for a portrait by Mathew Brady c. 1861. A copy of the photo and others of Sickles are included with the lot, and when viewing the high resolution version of the portrait available through the Library of Congress, you can even make out faint signs of the inscription on the scabbard. The sword has a distinctive knight pommel design, silver grip, twisted knuckle bow, "US" and classical martial trophies on both sides of the guard, and a lion head quillon. The 32 inch lightly curved blade has elaborate frosted etching in mainly floral designs along with some patriotic motifs, "U.S." on the left, "Tiffany & Co. N.Y." in a banner above the left ricasso, "COLLINS & Co./HARTFORD/CONN" on the left ricasso, and "1861" on the right ricasso. A gilt sword knot is tied to the guard. The scabbard has a "TIFFANY & Co." mark near the throat on the back with classical martial and floral pattern engraving, wreath suspension bands, and "'EXCELSIOR'/Presented to/Genl Sickles,/By His Sincere Friend" inscribed between the suspension bands. Excelsior ("still higher" or "ever upward") is the official motto of New York and was also the name of Sickles's famous brigade raised in the spring of 1861 early in the Civil War. By 1861, Sickles was a very established figure within New York Democratic politics and well-known from his prior scandals. His connections and charisma made him a natural choice to help raise regiments in support of the Union cause. While the brigade was originally intended to represent the whole of New York, it eventually was composed of men from twelve New York counties as well as five other states. As a Democrat, he naturally was faced with hostility by many Republicans, including the governor of New York, but Sickles won the support of President Abraham Lincoln who had his brigade designated United States Volunteers. He led the Excelsior Brigade in the defense of Washington, D.C. Due to his prior reputation and Democratic affiliation, the Senate initially rejected his nomination for brigadier general and thus forced him to give up command of his famous brigade, but Lincoln re-nominated him, and he was back in command and led his men at the Battle of Seven Pines and the Seven Days Battles during the Peninsula Campaign. In early 1863, Sickles was nominated to major general by Lincoln and given the command of the III Corps. The Excelsior Brigade was part of the III Corps' 2nd Division. As discussed in the previous two lot descriptions, he remains famous and controversial for his role as the III Corps commander at the Battle of Gettysburg and lost much of his right leg in the battle taking him out of action for the remainder of the war, but his actions and composure after being seriously wounded that fateful day later earned him the Medal of Honor. After the Civil War, Sickles remained with the army, but he was kept from combat commands. Instead, he mainly held commands in the South during Reconstruction and earned a reputation for protecting the rights of freedmen and laborers. After he retired in 1869, he continued in government service as the U.S. Minister to Spain in 1869-1874. He returned to Congress in 1893-1895 and sponsored the legislation that formed the Gettysburg National Military Park. He famously is said to have remarked, "The entire battlefield is a memorial to Sickles." Sickles had faced multiple financial setbacks throughout his life, and towards its end he was in financial straits. On Sept. 9, 1912, the Boston Evening Transcript page 12 headline read "Sheriff May Sell Sickles Collection" and the main article headline stated, "Sickles's Relics in Peril Ordered Sold to Satisfy a Judgment Veteran General Ninety Years Old is Worried...Swords and Other Reminders of the Great War." The article discusses another sword presented to Sickles from the citizens of New York and also quotes Sickles as saying, "I had four swords given to me during my war career, but I have only two left. The other two were stolen from my room in Washington just before the close of the war, and I have never been able to trace them. One was a gift from my officers, and the other, which I valued highly, was given to me by my soldiers after I was wounded at Gettysburg." The "sincere friend" that presented the current sword is not known. The consignor noted they believed it was a gift from President Abraham Lincoln. The president and his family met with Sickles many times while he was in the capital after being wounded at Gettysburg. This sword was purchased through noted dealer Peter Hlinka of New York City in the late 1950s.

Very fine. The crisp blade is mostly bright and has distinct etching, a bent tip, and minor age and storage related wear. The scabbard and hilt have bright original gilt finish in the protected areas and otherwise attractive aged patina, crisp designs, a distinct inscription, solder at the helmet seam, some dents (one very deep) in the otherwise fine scabbard body, and generally minor overall wear. The silver grip has a very dark and attractive aged patina. This is a very attractive and distinctive Tiffany & Co. embellished Collins sword inscribed to a well-known and controversial Union general, and is shown in a period photograph of General Sickles. This beautiful presentation sword combined with the cane inscribed to Sickles in 1864 and the Colt Model 1855 "Root" presented to him during Reconstruction represents an incredible opportunity acquire three historical artifacts presented to one of the Civil War's most famous generals: Major General Daniel Sickles, commander of the Excelsior Brigade and the III Corps at Gettysburg where he lost his leg in heavy fighting and showed tremendous courage that later earned him the Medal of Honor. 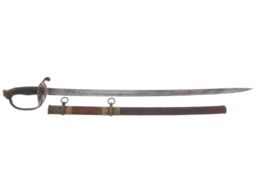 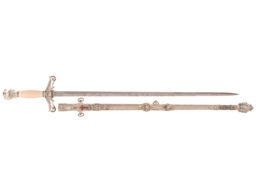 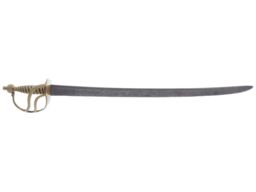 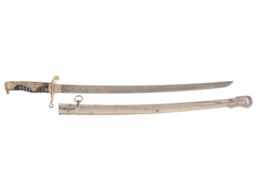 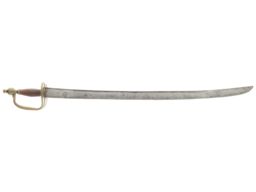 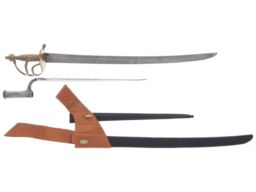