The Remington's revolvers were the second most widely issued by the Union throughout the Civil War, and the New Model Army revolvers became the primary revolver issue revolvers of the Union cavalry after the fire at the Colt Armory on February 4, 1864. The New Model Army was manufactured from 1863 to 1875 with a total production of approximately 132,000 and represented the last of Remington's .44 caliber percussion revolvers. They also provided the basis for Remington's subsequent Model 1875 Single Action Army revolver. Many of the Civil War percussion revolvers remained popular in the West after the Civil War for many years alongside newer metallic cartridge firearms. The top barrel flat is marked: "PATENTED SEPT. 14. 1858/E. REMINGTON & SONS. ILION NEWYORK. U.S.A./NEW-MODEL". The matching serial number is located on the barrel, trigger guard, cylinder, grip frame, and both grips. Single letter sub-inspection marks are located on various components. A boxed script "GP" (Giles Porter) inspection cartouche is stamped on the left grip panel. The revolver has a correct threaded "pinched" blade front sight, top strap groove rear sight, casehardened hammer, brass trigger guard, oil finished walnut grips, and blued steel.

Very fine aside from the refinished barrel which has 75% plus blue finish. 80% original blue finish remains on the other components along with smooth gray and brown patina where the finish has flaked, attractive aged patina on the trigger guard, and mild overall wear. The grips are also very fine and have minor handling and storage marks, a crisp cartouche, a slight chip at the toe on the right, and minor edge wear. Mechanically excellent. 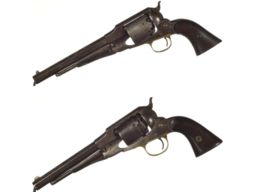 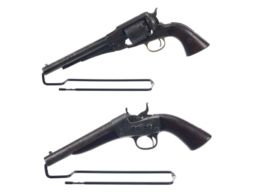 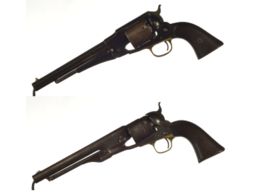 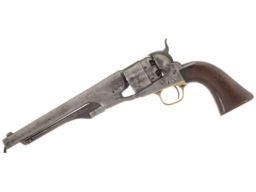 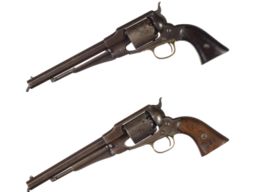 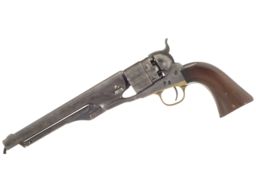