While we tend to think of multi-shot firearms being an innovation of the 19th century century and the "wheelguns" of men like Samuel Colt, innovative firearms designers had made numerous attempts at multi-shot firearms for centuries by the time percussion revolvers came out in the 1830s. In fact, there were mutli-shot "wheelguns" back in the 16th century: superposed load and double barrel wheellocks using single lock plates with two complete mechanisms to perform the task. There were even a very small number of wheellock revolvers. Wheellock pistols were already more complicated and expensive to make than other firearms in the period, so superposed load and other more complicated wheellocks would have been particularly expensive and limited to ownership by the elite. Examples similar to this one are primarily dated to the latter half of the 16th century. This Victorian era assembled wheellock pistol is designed to fire two shots from a single barrel using a massive double lock plate with two complete wheellock mechanisms fired using one trigger. This one appears to be setup so that a shorter trigger pull will fire the front shot and then a longer pull will fire the rear shot. A single strong pull would fire both nearly simultaneously. The smoothbore, two-stage barrel has the front vent approximately 4 3/4 inches from the breech end and the rear vent 5/8 from the breech. The lock and barrel have no visible markings. The fruitwood stock has extensive round inlays, inlaid borders, and inlaid panels with floral and entwining line patterns and a large knob pommel. Provenance: The Collection of Joe M. Wanenmacher Jr

Good with gray patina, evidence the pistol once had sights, mild pitting, and general marks and scratches. The stock is also fine and has some minor repairs and replaced inlays, crisp designs, some gaps at the breech, and light scratches and marks. Locks not tested. This is a solid representative example of an incredibly rare early firearms design! 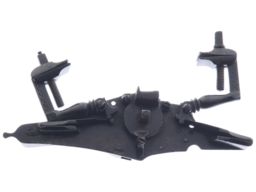 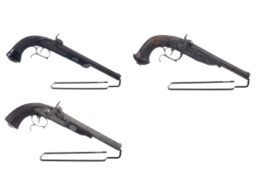 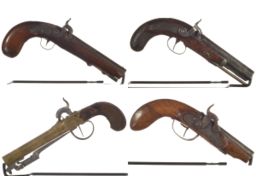 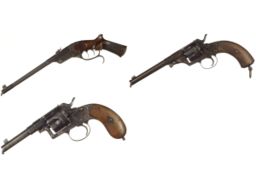 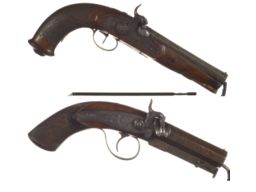 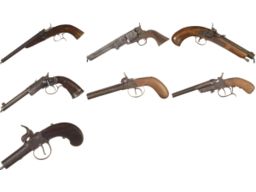