The evolution of the Browning High-Power pistol truly began in 1921, with a request from the French government for a pistol to replace their plethora of World War I pistols and revolvers. By 1923 John Browning had filed a patent for a high capacity pistol chambered in 9mm, which at the time was being referred to as the "Grand Rendement" or "High Efficiency". Results were promising through the French trials even with the weight restriction being constantly lowered. By 1929 the pistol almost completely resembled the High-Power we all know and in 1933 an order was placed by the Belgian military for 1,000 pistols, this example being one of them. These early "High-Efficiency/Power" pistols still display the iconic oval ejection port that was a carry-over from the development of the Grand Rendement. During the Belgian military trials, some users noted that they would prefer a different trajectory for the ejected casings, a change that could be made by changing the shape of the ejection port. Thus, the ejection port was changed to a more squared shape shortly after standard production began. This pistol has the standard two-line Fabrique Nationale address and Browning's patent mark on the left of the slide. The left of the frame and slide are marked with standard Belgian proofs as well as circled "H" military parts acceptance proofs and a "crown/PH" within an oval military acceptance proof on the frame just above the trigger. A similar set of proofs are visible on the barrel. It is fitted with a blade front sight, tangent rear sight graduated to 500 meters, serrated ring hammer, serrated slide stop and thumb safety, and a pair of checkered walnut grips.

Exceptionally fine as subjected to military trials, retains 85% plus of the original blue finish with the balance having thinned to mostly a smooth grey patina, primarily in the form of holster type wear, and a few light takedown marks. The grips are also very fine with a few minor blemishes in the otherwise crisp checkering. Mechanically excellent. 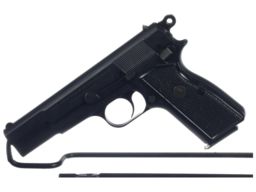 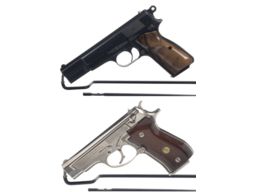 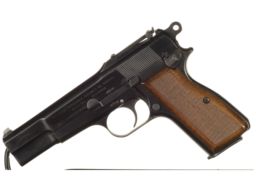 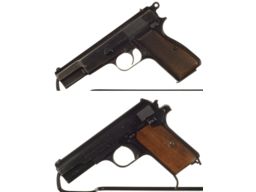 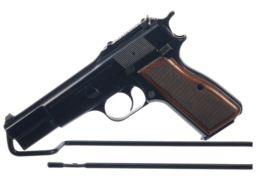