Included with this lot is a 2014 dated letter from a person described as a descendant of Lieutenant General Alvan C. Gillem, Jr., of the United States Army, who identifies this pistol by serial number as the General's property retained by the family. Having joined the Regular Army as an enlisted man in 1910 before being appointed a Second Lieutenant, Gillem saw service in the Philippines and the Mexican Border before being deployed as part of the American Expedition to Siberia in response to the Russian Civil War. During World War II, he would command the II Armored Corps at Fort Knox and the XIII Corps, 9th Army in Europe, the latter holding the distinction of making it within 50 miles of Berlin, the closest of any American unit, prior to the halt of the advance; the letter notes that Gillem received the pistol about this time, speculating that it was from a high-ranking person in the Magdeburg region. After the war, he would command the Third Army, serve as assistant to George C. Marshall on a mission to China, and act as American Commissioner in Peking, ending his service in 1950. Paint-accented fixed sights, with "1938" on the chamber, the Mauser banner on the front toggle link, and "crown/crown/U" commercial proofs on the extension and breechblock. The small parts are finished in bright straw color, with checkered grips and two blue finished alloy base magazines. Both magazines are mixed numbered, otherwise numbers are matching overall, including on the grips. Included with the lot is a brown leather Albrecht Kind holster and an unmarked takedown tool. Provenance: The Paul Crockett Jr. Collection

Excellent, with 95% of the original blue finish, showing mild spotting, some minor finish loss on the right side of the frame, mild edge wear and light handling marks. 97% of the bright original straw color is present, and the grips are excellent with a few light dings. The holster is fine, with minor scuffs and scratches. Mechanically excellent. 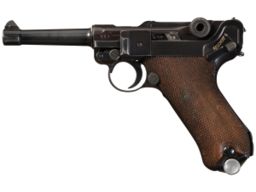 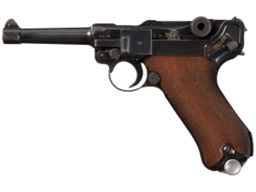 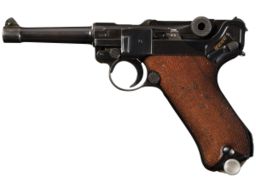 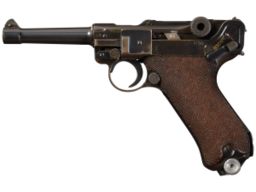 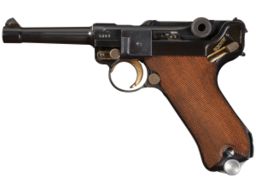 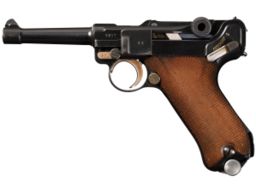