Offered here is the earliest known Winchester First Model 1873 Carbine in extant, serial number 47. The included factory letter (copy) confirms the carbine configuration with 20 inch barrel as well as confirming the carbine was received in the warehouse on December 22, 1873, and shipped on January 10, 1874. The accompanying copy of the Winchester ledger, which is also presented in James Gordon's "Winchester New Model of 1873" (page 48), indicates serial no. 47 was only the fourth Model 1873 carbine manufactured by Winchester after serial numbers 5, 33, and 36. This finding is confirmed by the included research letter from the Buffalo Bill Historical Center. The Model 1873 is one of the most famous of all American firearms and has been popularly known as "the Gun that Won the West" due to its popularity with pioneers. For collectors there a three basic variations to the Model 1873 with the primary differences between the styles found in the design of the dust cover guide and dust cover. The first model began the legacy of the Model 1873 that has endured to this day. As the earliest known Model 1873 carbine it will make for a standout rarity in the finest Winchester collection. These first models saw hard use, especially among pioneers headed westward, and surviving examples are becoming difficult to find, especially a first model carbine. James Gordon pointed out, "As seen elsewhere, the First Model 1873 (up to serial number 30,000) were produced in the mid to late 1870s. This was probably the mostly lively period in the history of the West, when frontier lawlessness combined with the raging Indian Wars. Guns shipped during this period were likely to be put to serious use there" (page 348). For his survey, Gordon only examined six Model 1873 carbines under serial number 350 or variation 1. Serial no. 47 is truly the rarest First Model 1873 Carbine for the advanced Winchester collector! The first models certainly have unique features that are different from all later production Model 1873s. The first model receiver features the distinctive dust cover held in place by grooved guides on either side. The dust cover has the raised checkered thumb print which appeared through the 2500 serial number range. As featured only on the first 350 Model 1873s manufactured, the lower tang has the script engraved model and serial number ("MODEL 1873/47"), and the upper tang is blank. It has the early type carbine rear sight located 1 inch from the receiver as seen through approximately serial number 1250. The brass cartridge elevator is correctly unmarked and has square corners. By serial number 5000 the cartridge elevator featured rounded edges. The introduction of caliber markings begin with the second models when calibers other than 44 WCF were introduced to the Model 1873 line. It has the correct lever style with no safety block provision as used up to the 27000 serial number range. A factory saddle ring is mounted on the left side of the receiver. The front barrel band has an integral front blade sight. The barrel has the two-line Winchester legend stamped ahead of the early rear sight which is marked "1", "2," and "3." There are correctly no caliber markings. The left side of the tang and the stock inlet have matching assembly number "65." There is the number "1" on the barrel and front of the receiver under the forearm. The carbine stock is fitted with a trapdoor crescent buttplate. The butt compartment holds a three piece cleaning rod. Niter blue loading gate, casehardened hammer, lever, and trigger, and remaining surfaces blued. Provenance: The Wayne Connor Collection

Fine as a true survivor of the Model 1873 legacy. The barrel, magazine, and frame retain 85% of the reapplied blue finish with thinning to brown on the balance. The barrel bands and buttplate are mostly a smooth brown patina mixed with blue. Traces of reapplied niter blue remain on the loading gate. 50% of the case colors remain on the hammer and lever. The wood is also fine with minor scratches and dings. Mechanically excellent. A true rarity in Winchester collecting, this earliest known Winchester First Model 1873 Carbine no. 47 is a must have for the serious collector and well worthy of the finest collection. 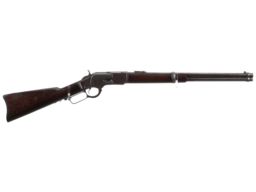 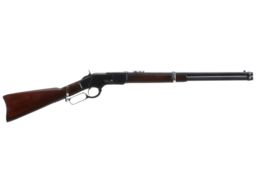 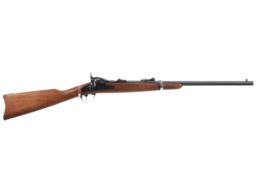 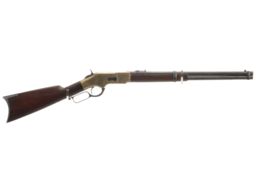 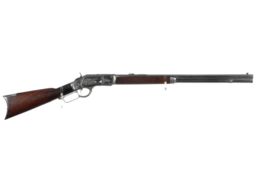 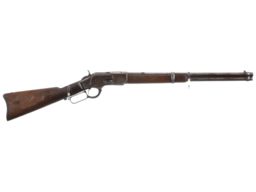