This attractive Colt Model 1860 Army percussion revolver was manufactured in 1870 and has New York engraving likely executed in the shop of Master Engraver L.D. Nimschke. The barrel and frame have distinctive scroll engraving patterns with punched backgrounds, and the cylinder and back strap have fan patterns. The trigger guard has a "Nimschke star" on the bow. The cylinder was engraved by a different hand in the same style. The revolver also has the standard markings and features, including matching serial numbers (wedge blank). In 1870, cartridge revolvers had not taken over yet, and the firearms market was still very tight following the boom era of the Civil War. The Model 1860 Army ranks third in total production among Colt's percussion guns and was the primary sidearm of the Union Army during the Civil War. Many in the West, continued to use Colt percussion late into the 19th century by Native Americans, gunfighters, and settlers even after cartridge revolvers like the famous Single Action Army became more popular. This revolver was part of Aberdeen Police Department Chief of Detectives John B. Gillespie's (1899-1973) collection in Washington for many years. Provenance: The John B. Gillespie Collection; The Gary Burghoff Collection

Very good with mostly an attractive silver-gray patina overall, traces of replated gold plating in the protected areas, bright trigger guard, crisp engraving, some faint pitting at the breech, and mild overall age and storage related wear. The cylinder is a renumbered to match replacement. The grip is fine and has attractive aged patina, age cracks, small chips at the toe, and mild edge wear. Mechanically fine. Overall, a very attractive engraved Colt Model 1860 Army with a lot of western frontier appeal. 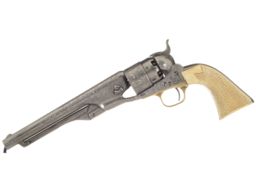 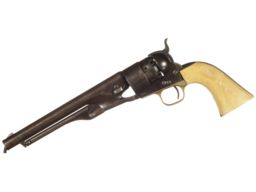 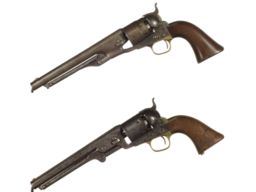 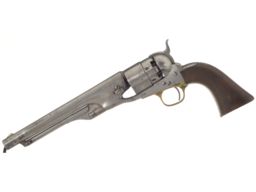 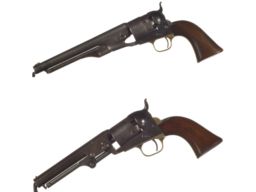 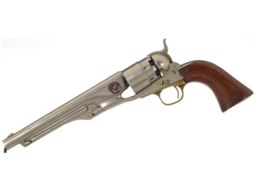