Edward Maynard originally intended to join the military but was forced to drop out of West Point due to ill health. He subsequently became arguably the nation's leading dentist and was also an active inventor. He is most famous today for his automatic tape primer, which ultimately proved too unreliable for sustained military use, and his more dependable breech loading single shot rifles and carbines. Only 2,000 of these muskets were converted by D.S. Nippes of Philadelphia in the late 1840s using Maynard's patented tape primer. These conversion muskets helped pave the way in development of the subsequent Maynard primed Model 1855 rifle-muskets. It has a bayonet stud on the bottom of the barrel, brass blade front sight on the forward strap of the front barrel band, trumpet head ram rod, "US/JH/P" marked at the left of the breech, "1848" dated barrel tang, "MILL CREEK/PA/1848" marked at the tail of the lock, "EDWARD MAYNARD/PATENTEE/1845" marked on the primer door, and two oval script inspection cartouches stamped on the left stock flat including "JH" and "WAT" (William A. Thornton). Includes a U.S. socket bayonet (does not properly fit).

Very good, displays a mix of faded original brown finish and smooth brown patina with some mild flash pitting. Modern replacement nipple. Stock is also very good as lightly sanded and re-oiled, with some light handling marks and scratches, some chips in the ramrod channel, a crack ahead of the rear lock screw, and a minor crack behind the lock. Mechanically excellent. Included bayonet is also very good. 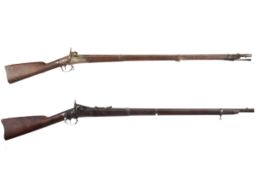 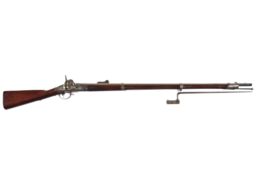 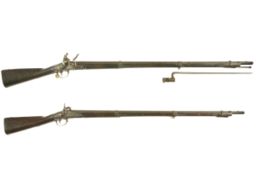 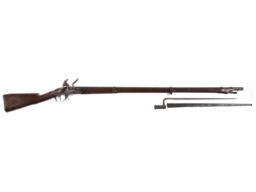 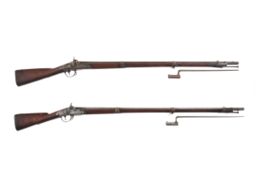 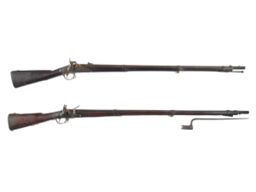