Many canes from the early to mid 19th century are seen which celebrate the military prowess or political ambition of Napoleon Bonaparte. There are also many examples seen which were simply intended to convey ones loyalty to him, both as emperor and in exile. This cane differs however, in that it portrays him in a negative light, clearly having been made for someone whose feelings towards the emperor were quite clearly not of reverence. The grip has been masterfully carved in the form of a comic representation of Napoleon, portraying him as small, rotund, and depressed. It also portrays "the little corporal" with his hand clutching his backside, which may be a reference to his battle with chronic hemorrhoids. He is fitted with a comically large bicorne hat that has a Russian soldier sitting on one tip and a Prussian on the other, that hat being fitted on small axles so it can tip back and forth like a teeter-totter. On either side of his head is inscribed "Moskau" and "Leipzig", two of his more embarrassing endeavors, the winter retreat from Moscow, and his defeat at the Battle of Leipzig. The grip is joined to the shaft by a silvered band that is inscribed with a large script "D" and is dated "1872", an indication that the original owner's disdain for Napoleon ran deep, his death occurring over 50 years earlier. The shaft is of smooth Malacca and is tipped with silver. 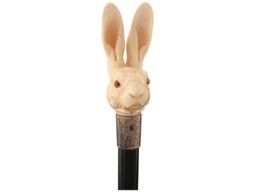 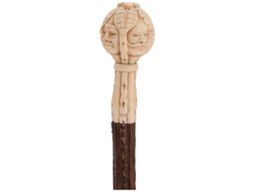 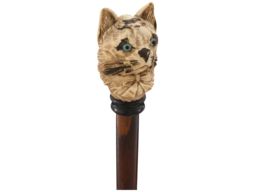 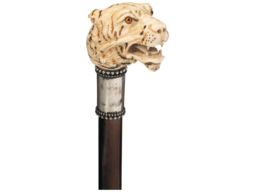 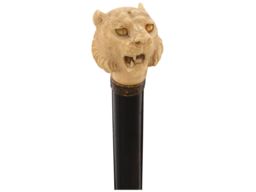 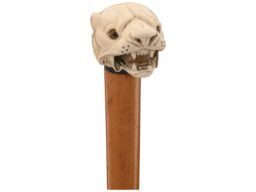