Offered here is a prize in Colt collecting: a factory engraved SAA shipped to famed Fort Worth dealer Wolf & Klar. The Colt Single Action Army Revolver is one of the most iconic historical firearms and is forever connected to the American West. Its legacy as a working man's gun in rough circumstances has made them particularly desirable for collectors, and the limited factory engraved guns especially so. It has been estimated that approximately 4,500 or .012% of the total First Generation Colt Single Action Army Revolvers manufactured were engraved. The accompanying factory letter confirms the 5 1/2 inch barrel in .45 caliber, nickel plating, hard rubber stocks and level 2 factory engraving. The letter also states the revolver was shipped on March 31, 1928 to renowned Fort Worth, Texas, dealer Wolf & Klar. This was a single gun shipment. In today's collector's market firearms with documented Wolf & Klar "pedigree" are highly sought after. Opening its doors in 1902, Wolf & Klar catered to cowboys and lawmen to quickly became part of the mystique of the Lone Star State. The factory level 2 engraving consists of floral scrollwork on a matted background and blossoms in the style of Wilbur A. Glahn. The engraving is very similar to SAA no. 251875 embellished by Glahn as identified and pictured in R.L. Wilson's "The Colt Engraving Book, Volume Two" on page 560. The barrel has the one-line Hartford address on top and "45 COLT" on the left side. The left side of the frame has the two-line patent dates marking followed by a Rampant Colt. The trigger guard has the Colt factory triangle proof and the number "3." The matching full serial number appears on the frame and right side of the trigger guard and back strap under the grip panel. Matching assembly number "867" is stamped on the back of the frame and loading gate. 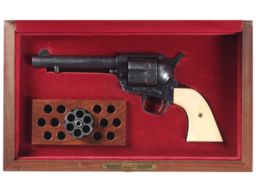 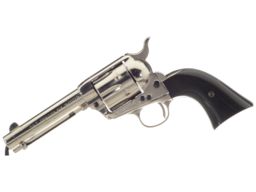 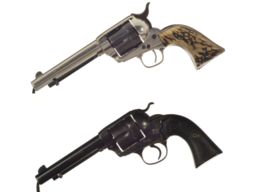 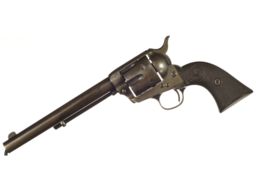 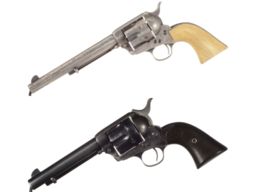 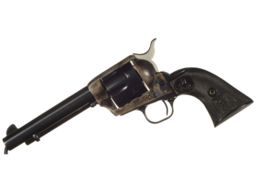