The Type 2 is a takedown variant of the Type 99 Arisaka, designed to be easily disassembled for use by Japanese paratroopers for carry during jumps. An included document signed by the consignor, dated September 7th, 2008, states, "My brother gave this Arisaka Type 2 Paratrooper rifle S/N 6754 to me in 1946 when the LST-1083 [Landing Ship, Tank] came back to the U.S. at the end of World War 2. He was an officer on the 1083, part of TF31 and the first LST to drop anchor in Japanese water on 27 Aug 1945 after the atom bomb was dropped. At 0930, 30 Aug 1945 the second LST by mere minutes to be beached at Yokosuka Navy base home of the Japanese Marine Paratrooper 'Rikusentai' Special Naval Landing Force with the US Marines of the 1st and 3rd Battalions of the 4th Marine division. That is where he captured the rifle." Features a blade front sight and folding rear sight with anti-aircraft wings, a mum present on the receiver, smooth pistol grip stock with cupped buttplate, "438" assembly number on the rear stock iron and barrel, "432" assembly number on the front stock iron, and the matching partial serial number on the bayonet lug, barrel lug, dust cover and bolt components. Includes a Toyoda Jidoshoki Seisakusho (Toyoda Automatic Loom Works) marked bayonet, metal scabbard, period canvas sling, two stripper clips, a July 1988 American Rifleman magazine containing an article about Type 2 rifles, and a binder containing a period photograph of Japanese paratroopers and information related to this rifle, the capturer and LST-1083. No official period War Trophy paper is included.

Exceptionally fine, retains 85% plus original blue finish with scattered areas of moderate freckling, and sharp markings and edges in the metal. Stock is very fine with numerous scattered dents and scratches, and otherwise defined edges. Mechanically excellent. Included bayonet and scabbard are very fine with a few chips in one of the grip panels, and the sling is very good. 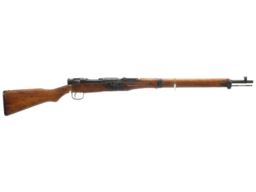 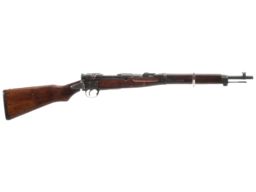 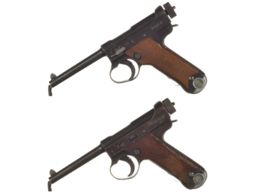 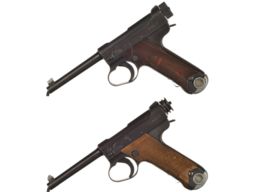 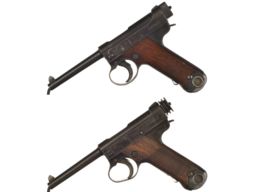 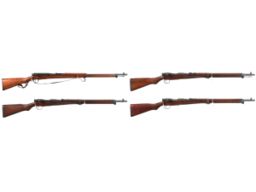