This is a very scarce example of a World War II issued Australian No. 1 Mk III* H.T. (Heavy Target) high mount sniper rifle that was arsenal refurbished/assembled in 1944. The Australian Army never converted over to the No. 4 Mk 1 rifles and instead continued to use these earlier pattern No. 1 Mk III* rifles. Reportedly, there were approximately 1,250 of these high mount sniper rifles assembled during late World War II at the Lithgow factory. This rifle is accompanied by a letter from the Australian War Memorial that indicates it was assembled into sniper configuration at the Lithgow factory on February 12th, 1945. It is fitted with a World War I 1918 pattern sniper scope with 3x magnification. The scope is attached via a set of claw mounted high turret scope bases that use a double claw front mount and a single claw offset rear mount. The rifle is fitted with a heavyweight "target type barrel", as developed after World War I by the Australian shooting clubs. These heavy pattern barrels can be identified by a capital letter "H" stamped on top of the knox form of the barrel. The stock socket is marked with a crown above "E.R" over "BSACo/1909./ShtLE/III." Coach wood stock and handguard set. An "H" is stamped on top of the stock wrist, and the top of the buttstock is fitted with a cheekpiece secured with two screws. The 1918 pattern scope is marked "SIGHT TELESCOPIC./PATT.1918 (AUST.)/A.O.C./V." and "1944./D(broad arrow)D" on the tube. The scope has an elevation dial graduated "1-10" (100-1000 meters) and features a post and crosshair reticle. Includes muzzle cover. 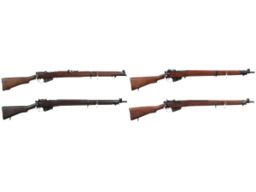 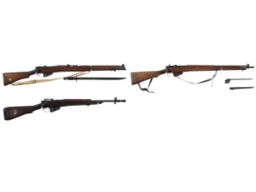 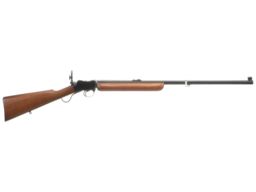 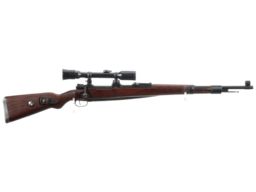 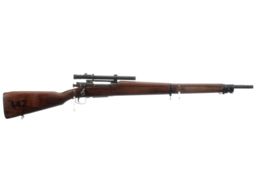 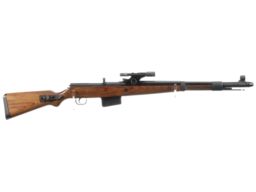