In May of 1942 the U.S. government initially placed an order with Union Switch & Signal Co. for 200,000 Model 1911A1 pistols, an order which was later revised to 55,000 pistols. This pistol was likely manufactured early to mid-1943. Model 1911A1 pistols were a very common sidearm issued to pilots during World War II, and this example very well may have been one of those that ended up in the hands of a pilot. The slide is marked with the "USS" monogram and "U.S. & S. CO./SWISSVALE, PA. U.S.A." on the left side, with a Robert Downie "R.C.D." on the left of the frame, and standard U.S. government nomenclature on the right. The blued barrel has a polished chamber hood and is marked "HS" and "P" on the lug. It is fitted with blade and notch sights, thin checkered hammer, short stamped trigger, long grip safety, arched checkered mainspring housing with lanyard loop, a pair of clear acrylic grips backed with white that may have once been "sweetheart grips", and a full blue "G" marked magazine. Includes a U.S. Enger-Kress "1944" dated shoulder holster, a type commonly issued to pilots who carried a Model 1911A1 as a sidearm in the cockpit.

Fine, retains 40% of the original dulite finish with the balance having thinned to mostly a smooth grey patina in the form of holster type wear, typical of a pistol that may have been issued to and carried in World War II by a pilot. The GI handmade grips are fine with some mild wear. Mechanically excellent. The holster is also fine showing some mild wear. 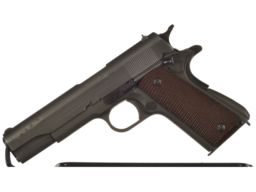 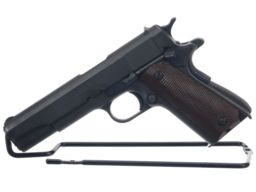 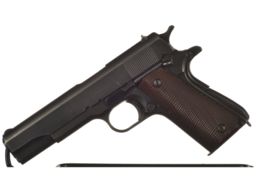 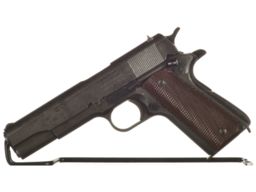 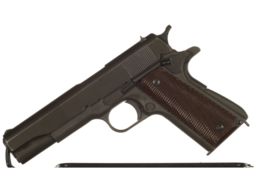 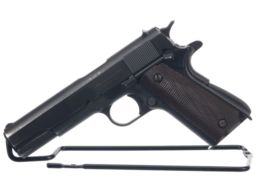