This U.S. Springfield Model 1903 National Match service rifle was originally manufactured in 1921. These rifles had selected star gauged barrels, polished bolts, polished receiver runways and followers and incorporated most of the features found on the National Match rifles sold to the public from 1921-1928. This late 1921 manufactured National Match rifle has the distinctive star gauge mark on the barrel muzzle which was adopted in late 1921 and has armory polishing marks on the bright polished bolt with distinctive armory feathered polishing marks above and below the safety lug and "WL/3" marked on the handle, receiver runways and the top of the follower polished to National Match specifications, and the Rock Island Arsenal cut-off with serifed letters and the "ON" side polished. The rifle has the distinctive black-green parkerized finish on the receiver, barrel, upper barrel band, trigger guard, floor plate, buttplate and small components. The rear barrel band is blue finished. The rear sight face is bright. The stock has a fine checkered buttplate. The rear sight correctly lacks the 2,850 yard volley notch found on World War I production rifles. The bolt has the post-World War I bent handle. The bolt body is correctly not serial numbered (National Match bolts were not serial numbered until around 1924). The safety lock thumb-piece has block letter markings. The trigger is serrated with a cross-hatched tip. The rifle receiver is roll-stamped "U.S./SPRINGFIELD/ARMORY/MODEL 1903." above the serial number. The barrel is marked "SA" above the Ordnance shell & flame insignia and the date "10-21". The oil finished black walnut straight grip stock has two reinforcing bolts, grasping grooves and is fitted with the lower profile post-World War I handguard. The stock has the Ordnance final inspection cartouche with the initials "W.E.S." in a rectangle on the left of the wrist, circled serifed "P" proof behind the trigger guard. Includes M1907 leather sling, rear sight cover, oiler in butt compartment, and a collector letter of authentication. 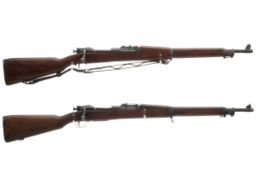 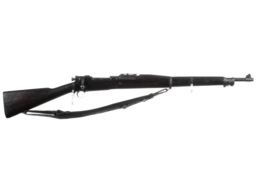 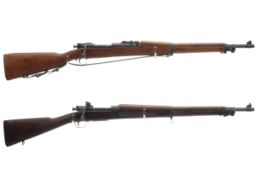 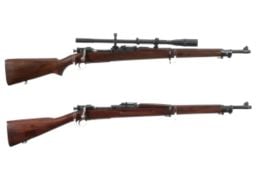 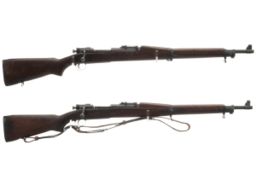 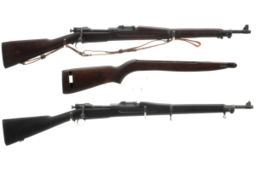