In January 2017 it was announced that SIG Sauer had won the highly competitive U.S. Military Modular Handgun System (MHS) contract to replace the Beretta M9 as the standard U.S. military sidearm, and later that year the U.S. Army announced the 101st and 82nd Airborne Divisions were to be the first units to receive the M17. Offered here is one of the first pistols issued to the 101st Airborne Division for field testing. Only 3,000 of these pistols were returned to SIG Sauer for sale on the commercial market. The introduction of the M17 marked the beginning of the end to the M9’s service with the U.S. Armed Forces that originated in the late 1980s when it replaced the Colt M1911A1. If the service life of the M1911A1 and M9 are any indication to the longevity of the standard U.S. military handgun, it will be decades before we see a round of rigorous testing to replace the M17, making this early U.S. Army example issued to the famed 101st Airborne Division a historic piece of military hardware of the modern era that will only gain more collector interest in the future. The M17 is a variant of the SIG 320 modular pistol and integrates an ambidextrous thumb safety to the modular fire control unit, with illuminated night sights, optics mounting point on the slide, "+P" weight recoil spring, and coyote tan metal and polymer finish. The grip unit is marked size "M" and displays a rack number "22" on the back strap texturing. The shipping box is a numbered match to the pistol and identifies it as "UDM17-9-SURPLUS" and contains two extra magazines, a standard weight recoil spring, cable lock, and papers. Per the included certificate, this pistol was part of the initial deployment of the U.S. M17 MHS Pistol in American service. An included Freedom of Information Act letter states this pistol was shipped from SIG Sauer to the Army General Supply and from there to Fort Campbell where it was issued to B Company, 1st Battalion, 26th Infantry Regiment, 101st Airborne Division. Formed in 1918, the 101st Airborne Division has established a long and historic legacy that has made it one of the U.S. Army’s premier units. Its “Screaming Eagle” insignia is instantly recognizable by friend and foe alike. The 101st is renowned for its WWII airborne operations role leading up to the Allied assault at the beaches of Normandy on June 6, 1944, and during Operation Market Garden and action taken during the Battle of the Bulge. During the Vietnam War the 101st participated in 12 campaigns and fought in major battles such as the Battle of Hamburger Hill and the Battle of Fire Support Base Ripcord, the last major confrontation between U.S. ground forces and the PAVN. Over the last 20 years, the 101st was actively involved in American operations in Iraq, Afghanistan and Syria. Headquartered at Fort Campbell, Kentucky, the 101st remains one of the U.S. Army’s leading land combat forces.

Excellent overall, retaining 99% plus original coyote tan finish with some scattered handling marks from use with the 101st Airborne. The grip module is also excellent with some scattered dings and scuffs and overall crisp grip texturing. Mechanically excellent. Box is excellent with limited storage and handling marks. This is a rare opportunity to own what is well on it's way to being the next in a long line of storied U.S. military sidearms. 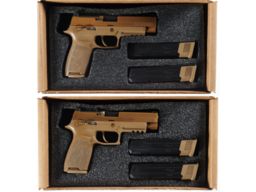 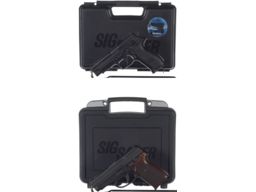 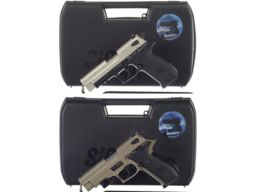 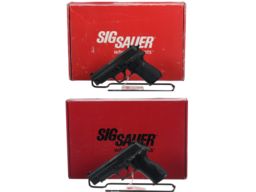 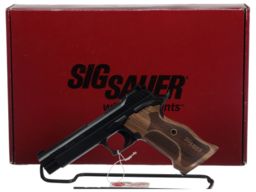 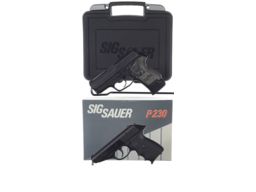