This exceptional Colt factory documented example of a William Gough engraved Model 1903 pistol was manufactured in 1921. The accompanying factory letter lists this pistol with a "green (soft)" finish indicating the pistol was shipped without final finish for engraving outside the Colt factory, 3 3/4 inch barrel in .32 caliber, and type of stocks not listed when shipped to Murta Appleton of Philadelphia, Pennsylvania, for W.H. Gough on 7 April 1921. This was a three gun shipment on factory order no. 2796/3. Colt frequently sent guns to Gough for engraving and the guns would be sent back to the Colt factory for finishing. Gough's engraving style is very similar to Wilbur Glahn's. This pistol showcases Gough's signature floral scroll pattern and fine lined background. The back of the frame is engraved with Gough's distinctive five-pointed star which has appeared on other known examples of his work. In addition to the exceptional engraving, the initials "WP.G" are inlaid in gold in an oval on top of the slide. The consignor attributes these initials as that of major Walter G. Penfield, the U.S. government inspector at the Colt factory from 1909-1914. There is no documentation to support this claim, but it is certainly plausible. A zig-zag line pattern is featured on the front strap, trigger guard, grip safety and underside of the frame. The pistol has a two-tone magazine marked "CAL. 32/COLT." According to author John Brunner, a total of only 726 Model 1903 Hammerless pistols were factory engraved with Gough identified as having engraved only 34 between 1916 and 1923 per factory records. Additional included documentation includes information about Walter Penfield and his descendants.

Exceptionally fine, retains 85% plus of the original blue finish with the grip safety having thinned to a smooth dark grey patina, some scattered light specks of surface oxidation, and crisp engraving overall. The grips are also very fine with a few scattered light blemishes in the otherwise crisp checkering. Mechanically excellent. 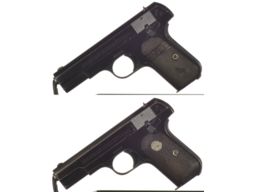 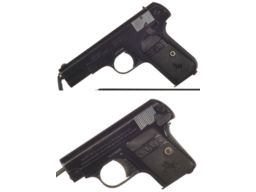 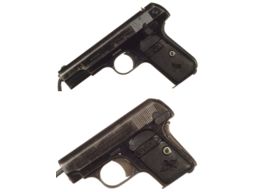 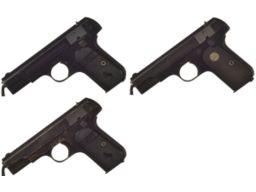 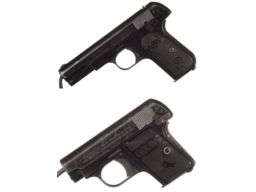 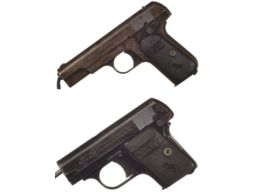