Manufactured in 1883 as a Third Model with integral dust cover rail on top of the receiver and the dust cover with grip serrations at the rear. The standard two-line address and King's patent marking is on the top of the barrel in front of the rear sight. This rifle lacks caliber markings, meaning it is chambered in the original Model 1876 caliber, .45-75 W.C.F. This is slightly unusual for an 1876 in this serial number range as both the .45-60 and .50-95 calibers were introduced in 1879, after which most rifles, even if chambered in the original caliber, received caliber markings. Both sides of the receiver on this example have a small non-factory applied "T.J.H." stamping, which are likely the initials of a previous owner, the identity of which is unknown. The upper tang is marked with the standard model designation and the serial number is on the lower tang. It is fitted with a German silver blade front sight and a folding ladder rear sight, and mounted with a smooth forearm and straight grip stock with a trapdoor crescent buttplate (cleaning rod not included). The included factory letter lists the rifle with an octagon barrel and plain trigger when received at the warehouse on 8 September 1883 and shipped on 13 December 1883 in order number 9719.

Very fine, retains 75% of the bright original high polish blue finish, 60% of the original niter blue on the loading gate, and 60% of the original case colors with the balance having thinned to mostly a smooth brown-grey patina. The wood is also very fine with some scattered minor dings and scratches. Mechanically excellent. A very fine example of a Winchester Model 1876 rifle! 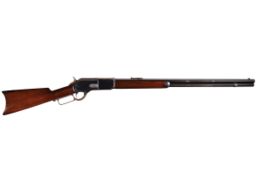 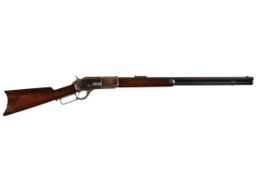 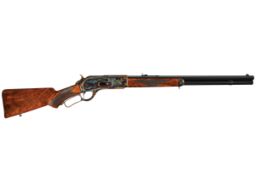 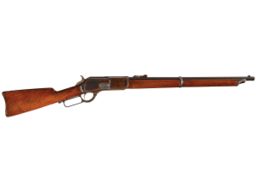 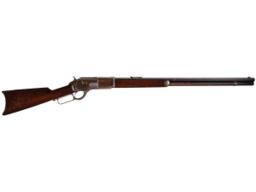 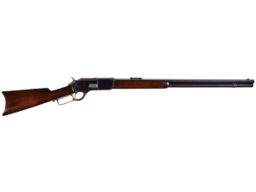