Manufactured in 1905, this is a rare very scarce Winchester Model 1892 Trapper's carbine with a desirable factory 14 inch barrel. Carbines such as this one would have still been highly valued in the American west, or any other place in the world that remained somewhat untamed. The included 2021 dated Bureau of Alcohol, Tobacco and Firearms exemption letter lists this carbine as being removed from the purview of the National Firearms Act and classified as a curio and relic. The barrel has the caliber marking at the breech and is fitted with a pinned brass blade front sight and folding ladder rear sight. There is a stamp on both the top of the barrel and left of the receiver that is a conjoined "BP" within a shield, which is likely an export mark of some kind. The left side of the receiver is fitted with a saddle ring. The upper tang is marked with the three-line model and trademark information, and the serial number is faintly marked on the bottom of the receiver. It is mounted with a smooth forearm and straight grip stock with a carbine buttplate. The included factory letter confirms the caliber, 14 inch barrel length, and receipt at the warehouse on 21 December 1905, and shipment on 10 January 1906 in order number 40929.

Extremely fine, retains 75% plus of the original blue finish with the balance having thinned to mostly a smooth grey-brown patina, primarily on the sides and bottom of the receiver, and a few scattered small patches of light pitting. The wood is very fine with some scattered minor dings and scratches, typical of use. Mechanically excellent. 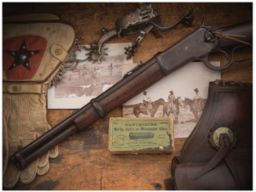 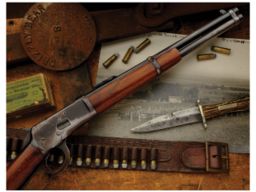 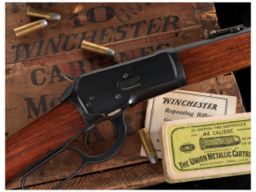 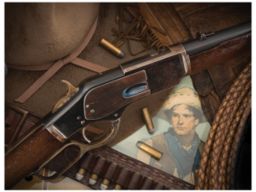 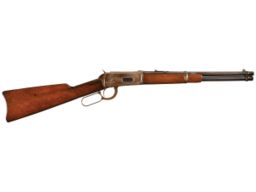